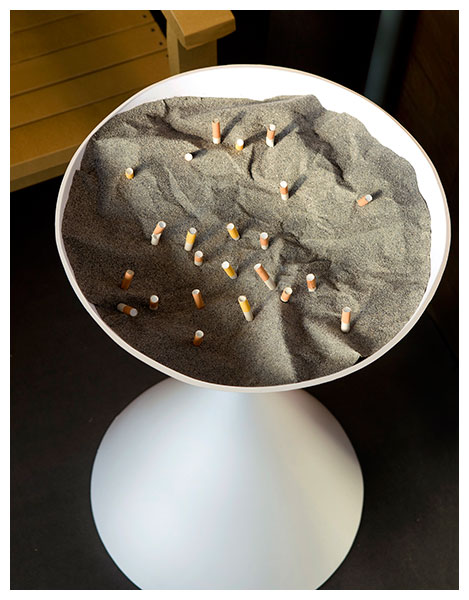 Early last December, Thomas Demand’s studio of 12 years, next to the Hamburger Bahnhof in Berlin, was bulldozed. Demand had known that sooner or later this day would come – the building’s prime location made it vulnerable to developers – but it marked the end of an era for the German artist. He had lived in the city since 1995, around the time that he first became known for his photographs of life-sized card and paper models of vacant interiors recreated from found photographs, often associated with poignant human narratives.

Demand first began spending time in Los Angeles in 2010 as a scholar at the Getty Research Institute. After three and a half years spent in planes over the Atlantic, he has resolved to settle, at least for the time being, in California. He had long nurtured an ambition to live in Los Angeles, and in 2012 his gallery Matthew Marks opened a space there. When we met at his Culver City studio a week after the demolition, Demand admitted that his relationship with the city is still in its honeymoon phase. “I come here, I see the sun, I’m happy, I have an empty space, I’m still the master of my own schedule. I’m enjoying this freedom quite a lot.” Following a hectic 2013, Demand had almost entirely cleared his calendar of commitments for the coming year.

The space in which we were sitting was, indeed, quite empty. I had expected a bustling operation involving a platoon of assistants, card and paper models mid-construction, administrative staff, storage areas for prints and materials. Demand had warned me that there was “not much to see”; I should have taken him at his word. He had only moved into the building two months before. “I’m like a hermit crab. I basically have a pop-up studio,” he explained. A couple of robust plastic trunks carry almost everything he needs: cutting tools, adhesives, and some power cables. Two plywood chests contain his archive of coloured papers, and another crate contains his photographic equipment. Everything else he orders in specifically for each project.

My expectations were calibrated, perhaps, by a lecture I’d heard Demand give about the complexity of his recent project Pacific Sun (2012), a 100-second animated film that recreated the cataclysmic effect of two gigantic waves on a cruise ship restaurant, as captured by a security video. Fifteen months in the making and requiring dozens of specialist assistants, it was his most logistically ambitious work since Grotto (2006), a photograph of a 52-tonne life-size cardboard model of a cave. Pacific Sun was made in Los Angeles – in a previous studio, bigger than Demand’s current premises but lacking air conditioning. The fluctuating humidity (along with occasional seismic tremors) caused Demand’s paper and card models to move, incrementally, overnight, which is disastrous for the stop-motion process.

While making Pacific Sun, Demand realised that it may not always be the most efficient use of his time to be present in the studio while assistants painstakingly adjusted models and equipment. His series ‘Model Studies’ (2011), in which he photographed the maquettes of unrealised structures by architect John Lautner, was made during this time in the archives of the Getty Research Institute. It was the first time that Demand had taken photographs of models not made by himself, and it permitted a quicker and more liberated mode of making images. These changes of pace, he says, are crucial.

“The good thing about paper is that it is actually really fast,” he told me. Since the acquisition of a digital paper cutter during the making of Grotto, not everything in Demand’s photographs is necessarily a feat of astonishing handcraft. In Control Room (2011), which shows the Fukushima Daichi power plant after the Tohoku earthquake, gridded panels dangle from the ceiling. “If you made them by hand,” Demand said, “the picture would be about those things taking forever to make. That’s not what it is about. They need the appearance of industrially made objects. This is a corporate headquarters. I needed that kind of coldness of material, and that’s why I used a mechanical process.”

Demand contrasts the grids with an earlier work, Lawn (1998), in which every blade in a patch of grass was cut and bent by hand. “People ask me, ‘What happened on that lawn?’ Well, the picture is about not having anything happening, it’s about the complexity of the banal, the everyday. How much is on that lawn is just unbelievable.” It that instance, it was vital that Demand made the work entirely himself. But even when working with mechanised processes or groups of assistants, he retains control over every part of the picture. “While I’m doing it I’m thinking about it. And I don’t want to get rid of that thinking process by industrialising my approach. I think the world can only take so many Thomas Demands anyway. I’d rather be the master of my own work than master of my own career.”

He was thinking a great deal about time when he decided to print his series ‘Dailies’ (2008– ongoing) using the dye transfer process. In 1992, Kodak ceased production of the paper and chemicals necessary for this technique; only a few people in the world still have the stockpiles of materials necessary to create these superbly rich archival prints. Each print, Demand said, takes days. The time invested, and the resultant longevity of the prints, contrasts with the casualness of the original images: snapshots taken by the artist on his iPhone.

The fleeting nature of the photographic moment is a central preoccupation in Demand’s work. Pinned to his studio wall is a photograph torn from a newspaper of a woman standing between two buildings; behind her, over a wall, is a magnificent cherry tree in full blossom. When I next visited Demand, a month later, two tables were laid out with stalks, painted stamens, and pale pink petals in bags, cut by the digital plotter in Berlin. Three assistants sat at a table and assembled the flowers, curling petals and binding them to stalks with strips of crepe. At this stage, Demand did not know how much of the photograph he would recreate, nor how long the work would take. He had been commissioned to produce wallpaper featuring a detail of the blossoms for the café of the Neue Nationalgalerie, Berlin; he planned to coincide his project with the cherry blossom festival in Tokyo, which usually takes place, depending on the seasons, in April. As always, time was of the essence.