Here’s a good one: a New York gallery comes to Los Angeles to do an exhibition of its artists in a colleague’s space. The exhibition opens a week before the home-coming leg of Mike Kelley’s touring retrospective, installed at the Museum of Contemporary Art, two years after the revered artist’s suicide. What do the New Yorkers title their show? ‘Depression’.

Kelley was not actually mentioned anywhere in the exhibition’s four-page press release, which was assembled from multiple sources by the proprietors of Lower East Side gallery Ramiken Crucible. But his name did appear on an essay he wrote in 1989 about the San Francisco-based group Survival Research Laboratories (SRL), which was reprinted and available for gallery-goers to take away. Kelley’s influence was felt, too, throughout the show: from the inclusion of a hulking metal machine designed by SRL to various architectural models and a mannequin in fancy dress, and in its tendency towards low-grade materials and acid wit.

The exhibition was themed, the press release explained, around the psychic condition that ‘the most interesting artists’ live in a constant state of. ‘Depression is a form of pragmatic realism,’ deriving, it continued, from the acceptance of the certainty of death. To face that certainty and still produce art, ‘is a radical gesture’. There is a lot here that one might take offence at: for those with first-hand experience of clinical depression and its often catastrophic consequences, the curators’ bandying about of the term, without distinction between a paralyzing, agonizing sickness and a passing spell of Keatsian melancholy, seems careless, even cynical. Would they go so far as to suggest that the depth of Kelley’s depression, for instance, was responsible for his greatness as an artist? That’s a hard line to pursue.

Nevertheless, there is something attractive about the indefensibility of their thesis, as if they are fully aware that they are skating on thin ice. If we take ‘Depression’ to be a rhetorical and hyperbolic proposal, we are likely to find grains of unpalatable truth within it: many creative people do, after all, find productivity in illness. Most art works in this exhibition, however, functioned as objective illustrations of depression, rather than as inner expressions of the condition. One of the characteristics of real depression is that it is fundamentally indescribable (although numerous writers, from Aristotle to David Foster Wallace, have tried). This leaves sculptures such as Dan Finsel’s affective memory cage (2014) – a cage within a cage within a cage within a cage within a cage – in uncertain metaphorical territory. The barbarous Spiked Roller Machine (1984) by former SRL member Matt Heckert is a large, rusted steel contraption designed to do precisely what its name suggests – analogous, the curators say, to the onset of depression. (Other machines devised by the punk collective included a six-legged, fire-spitting robot driven by a guinea pig called Stu.) 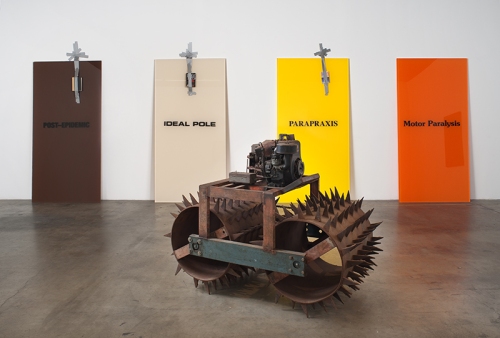 Just as illustrative – comically so – was Andra Ursuta’s apparatus Stoner (2013), which consisted of a machine that randomly lobbed balls of clay at a tiled wall built especially for slow destruction. A chain-link fence safeguarded visitors, unnecessarily on both my visits because the lobbing machine was impotently (though poignantly) firing blanks. On the floor beside Ursuta’s noisy installation, a large ammonite (65 million years old, according to the checklist) from the artist’s collection served as a kind of temporal yardstick that should, in theory, have reduced everything else in the space to infinitesimal insignificance. (What’s the point of anything? We’re all fossils in the end.)

It didn’t, of course, because in the present we are rescued, from one instant to the next, by humour and by beauty. ‘FUCK EVERYONE’ reads the tiny inscription on Charlotte Hammer’s Fe (2013), a pristine surfboard carefully shaped to avoid symmetry or seaworthiness. An architectural firm calling themselves We Will Replace All of You With Cool Mexicans (don’t bother Googling them) presented plans and a striking maquette of ‘the ideal art space’ – an improbable structure that, apparently, will float in international waters, and will open in 2100 under the name Unamerican Fine Arts. As with Gavin Kenyon’s Pimpin (2008–14), a mannequin dressed in a hilarious dandyish rooster costume, I sensed that we were getting off topic, but that these moments of levity were welcome, even necessary.

Large, mixed-media canvases by Borden Capalino and small inkjet prints by Lucas Blalock survived the determinism of the curatorial scheme, which expanded, rather than co-opted, their range of meanings. Blalock’s abstract composite photograph untitled with containers (2013) transcended the details of its technical production and became, like depression itself, something acutely sensed but impossible to describe.