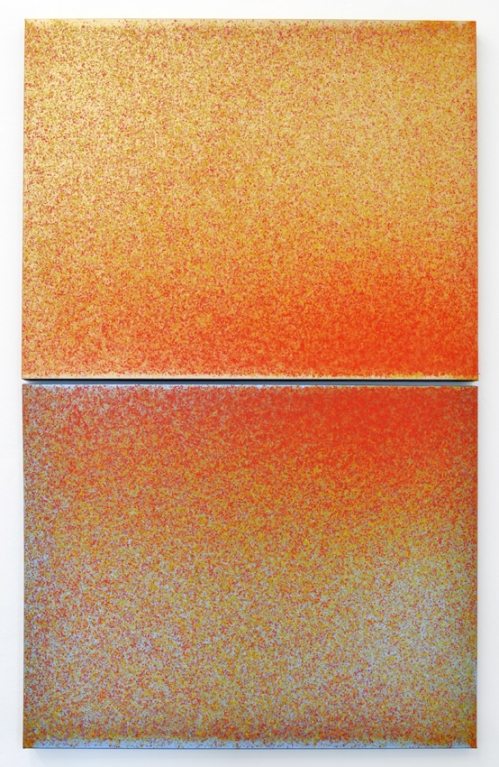 Ultimately, it’s about God, or at least a whiff of the divine. And also about not getting shit on your hands.

The human body is a frail and unreliable instrument, and when put in charge of applying marks to a pictorial surface — the hand holding a paintbrush, for instance — flaws and inconsistencies are bound to arise. Ever since Western art uncoupled itself from the sacred, artists have come to embrace those flaws; for many, in fact, they constitute the fundamental essence of their style.

In 1913 Marcel Duchamp delivered a rejoinder to what he saw as centuries of sentimental subjectivism when he dropped three-meter-long pieces of string onto a canvas, and fixed them where they fell. 3 Standard Stoppages is, in one sense, a joke about precision, but it also achieves its own kind of perfection through the removal of the artist’s hand. Duchamp traced the same threads onto other works, including his last painting on canvas, Tu m’ (1918). Nearly a century later, Cory Arcangel updated Duchamp’s perfect joke in his series of “Photoshop Gradient Demonstrations,” in which he generated immaculate color-field prints from Photoshop and incorporated the instructions for replicating them in the title.

The artist who most famously followed Duchamp by dropping lines onto a canvas was Jackson Pollock. But between Duchamp and Pollock there exist tangled threads of influence, predominated by the Surrealist allegiance with chance as a generative tool, especially through techniques of automatic drawing. Pollock also studied the sacred sand drawings of the Navajo, who would cast colored sand onto the ground in ritual designs. Most significantly of all, in 1936 he attended David Alfaro Siqueiros’ Experimental Workshop in New York. Siqueiros, one of “los tres grandes” Mexican muralists, encouraged his students to experiment with poured paint and commercial airbrush techniques. In Cosmos and Disaster (1936) Siqueiros’ painting methods embody the dichotomy of the work’s title: splinters and sand embedded in the paint describe the abstracted disaster in the lower part of the image; above, the cosmos is conjured with airbrushed and dripped paint.

In Los Angeles, thanks to airborne vapor and particulate matter, a perfect gradient backdrop exists as an almost constant contrast to the crude impasto daubs of the streets and sidewalks, and to the stucco exteriors of many buildings. Cosmos and disaster have often provided philosophical antipodes for the city’s self-image: it looks out onto the ocean and up at the sky, inclined to the metaphysical and astrological; or, it’s an unsustainable settlement, shadowed by imminent catastrophe, in inexorable, abject decline. Using sprayed paint, many Los Angeles artists have adopted the visual signifiers of these thematic poles.

The spray can, the airbrush, and the spatter gun offered artists an alternative to the inadequacy of their own physiognomies by removing the hand from the process of picture-making. Paint could be applied to a surface with inhuman evenness, allowing one color to transition to the next with infinitesimally smooth gradation. Harking back to the Duchampian readymade, Light and Space artist De Wain Valentine once said of his dyed resin sculptures that “all the work is about the sea and the sky. I would like to have some way, a magic saw, to cut out large chunks of ocean or sky and say ‘here it is.’”(1) James Turrell did exactly that, with his series of “Skyspaces,” which he began in the 1970s. In many of his gallery installations using artificial colored light, he strives to replicate the perfect gradients of the sky at dawn or dusk.

The Light and Space movement, dominated by sculptors and installation artists, laid down something of a gauntlet for painters who were hard pressed to match their marvelous effects with formless color. Aerosols and airbrushes allowed them to get close; transformed into a beam of atomized and radiating color, sprayed paint is akin to light itself. 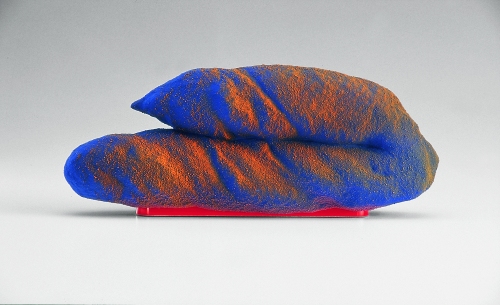 Two pioneering Californian ceramicists, Ken Price and Ron Nagle, also used paint to approximate the spectral colors of the luminous firmament in their work, often contrasting it against the earthbound, gastrointestinal corpus. (Clay is, after all, ultimately nothing more than dirt.) Akin to light works by Turrell or Robert Irwin, both ceramicists used sprayed paint to manufacture in-between colors that are more feelings than tones. A late work by Nagle, Walking with Sadie (1998), is based on the shape of a dog turd, mounted on a sliver of glossy red and dusted with contrasting blue and orange mists of paint. Form is utterly vanquished by color; it has become a sublime and ascendant object.

The other reason to spray paint onto any surface is to avoid touching that sur- face in the first place. If you want to apply a mark not to a canvas or a product but directly onto the world itself — onto the grimy concrete, brick, and metal of the built environment — the aerosol can is ideal. It overlays almost any texture. You don’t get dirt from the wall or sidewalk on your pen or your brush, a one-way imposition that taggers and street artists appreciate.

For most of the 20th century, it was largely commercial artists who adopted spray techniques — to paint a sunset onto the tank of a Harley or an out-of-focus background for a photo shoot. In the 1960s, all manner of low-rent artistry suggested itself to a generation of artists who were trying to shape their own version of high-brow culture. Billy Al Bengston, who had worked in a motorcycle shop, and Judy Chicago, his student, both sprayed their paint over sharply masked shapes on aluminum, Masonite, and car hoods. These were paintings that were built to weather the abrasion of the streets, even if they would never really need to. They moved smoothly along the interface between terra firma and the air.

Ed Ruscha, who claims to find many of the appropriated words that feature in his images from his automotive dérives around the city, often sets them against sprayed backgrounds or situates them beneath airbrushed skies. In the painting Me (1999), the two capitalized letters of the title are masked against a light mist of sprayed red paint, tucked against the right edge of the canvas. A monumental snow-covered mountain dominates the center, making the word — and the meaning pegged to it — feel as insubstantial as air.

Splatter, by contrast, is what happens when spray falls short of vapor and becomes diarrheal. Paul McCarthy and Richard Jackson have flung paint through various mechanisms as a critique, in part, of Pollock’s brand of airborne Abstract Expressionism. Jackson is especially fond of creating sculptures of animals such as dogs or deer that fire paint out of their assholes. 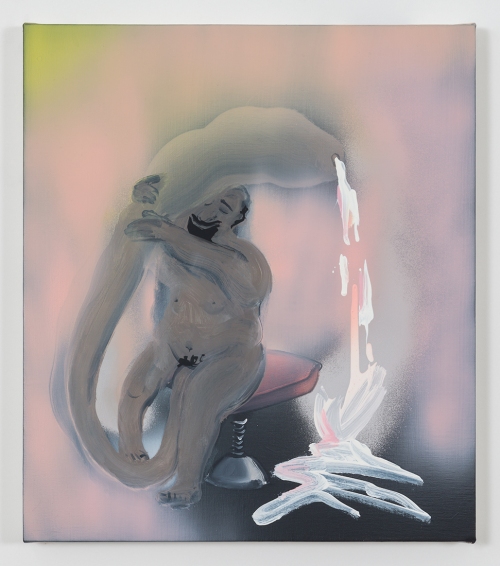 Many contemporary practitioners draw on spray paint’s dual associations with transcendence and abjection. In recent paintings by Los Angeles-based Tala Madani, glowing light sources and sprayed gradient backgrounds are contrasted with the wet forms of loosely rendered, pathetic protagonists. In Smiley Clean (2015), a layer of goopiness — and the insinuation of decay — arrives in the form of tricolor toothpaste dispensed by a toddler into three men’s mouths. In O (2015), a man blissfully hugs his own enormous, serpentine, and gushing cock.

In 2005, John Knuth began experimenting with using houseflies as aerial couriers to deliver color to the surface of the canvas. By feeding captive flies sugar water mixed with paint, he created gaseous color fields that recalled the spray paintings of Jules Olitski from the 1960s, except that any beauty in Knuth’s paintings was cut with the queasy knowledge that each tiny mark was not spray but a tiny speck of vomit. Another Los Angeles-based artist, Alex Israel, makes paintings that also hark back to Olitski’s early work, except that Israel employs not flies but scenic artists from the Warner Bros. studios to spray graduated pastel tones on his shaped canvases. Both artists find novel ways not to get their hands dirty. Indeed, the untouched quality of their work is essential to its sinister romance.

In his superhuman aspiration to capture nature, Valentine’s “here it is” touches on another function of artists’ use of atmospheric color shifts: to commodify the ethereal. In 2014, the New York artist Rob Pruitt, who titled a recent series of airbrushed gradient canvases “The Suicide Paintings,” set up a spray booth in the Beverly Hills branch of Barney’s and supervised the custom dyeing of J Brand white jeans. When Pae White was invited to create a project at the 2004 Frieze Art Fair, she had the fleet of VIP cars individually sprayed with acid-hued gradient paintjobs. For both projects, the instant overlay of a multi-hued color gradient transforms something banal and mass-produced into something uniquely authored and visually spectacular.

Is it a coincidence that several Los Angeles-based artists who employ spray techniques all studied around the same time at Art Center, a college known for its successful commercial and automotive design departments? Sterling Ruby, Aaron Curry, Joshua Nathanson, and Nathan Hylden all graduated from the MFA program in 2005 or 2006. More revealing than the association with industrial processes is each artist’s use of misted color as a foil for the gestural, the handmade or the debased in their work.

Hylden lays bands of translucent sprayed paint across wetly brushed marks that almost parody gestural abstraction. For Nathanson, the airbrushed line is a cipher for expediency, for a speed of application that recalls the brush tool in Photoshop, led shakily by a mouse. (Or the hurried application of a tag along a freeway before the cops arrive.)

In Curry’s recent paintings, spray provides a supernatural or celestial glow that often emanates from the crude lines of his brushwork — a crudeness that is carefully manufactured. In neon tones against black backgrounds, paintings such as

Cosmicgasmatical (2015) also reproduce the cheap tricks of Aerosolgrafia pavement artists and heavy metal T-shirts. In renderings of the infinite, the gutter is never far away. All of these artists manage to fuse the exacting craftsmanship of Finish Fetish with gestural Ab-Ex painting — two movements that, in the 1960s, could not be further apart. Spray is painting at both a physical and conceptual remove, a technique which allows marks to be made with critical detachment but which also, crucially, leaves the door open to visual seduction.

The invention of spray paint, at the end of the 19th century, allowed us to have something unavailable to artists for centuries — a flawless surface—instantly and effortlessly. Yet the discourse around spray in contemporary art is one of paradox and ambivalence, especially in Southern California. The kind of perfection that an aerosol or airbrush nozzle dispenses seems always to require its antithesis to appear as well, perhaps to temper the anxiety of having precisely what we thought we wanted, much too easily.