The door of Peter Shire’s first ceramics studio, in Los Angeles, opened directly onto the sidewalk. He moved in three years after graduating from the Chouinard Art Institute, in 1972, and soon discovered that the corner of Echo Park Avenue where his studio was located was also where the members of the local gang – the Echo Park Locos – regularly hung out.

“All the guys would come in the studio,” Shire recalls, in his current, much larger studio a few blocks down the street. “They were a little younger than me, but not much. They’d see me doing stuff, and they’d doodle on my boards. I thought, ‘If they’re doing my thing, I’ll do their thing.’”

This December Shire will once again throw open the doors of his studio – as he has since 1972 – for his annual Holiday studio pottery sale, an event that draws friends and fans from across the local community. 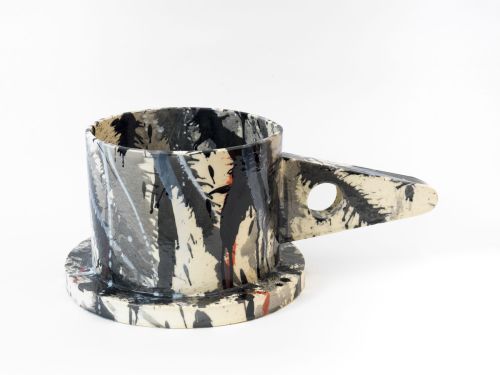 Echo Park Pottery is just one department of Shire’s boundlessly prolific artistic practice. He is perhaps most widely recognized as the only American member of Memphis, the Italian design group founded by Ettore Sottsass in the 1980s. Memphis is notorious for its jazzy patterned laminates and flamboyant, asymmetrical shapes; Shire’s 1982 multicolored Bel Air chair has a back shaped like a shark’s fin and is supported on one side by a large, painted wooden sphere.

“I like what’s funny,” says Shire, “and what’s funny is often what’s insulting.” His designs for Memphis in the 1980s were like raspberries blown in the face of good taste. Nevertheless, he ascribes to traditional values of quality and craftsmanship. “What I am trying to do is to make something of value, of beauty, of worth.”

This fall, New York’s Jewish Museum has organized an exhibition around a Menorah made by Shire, titled ‘Memphis Does Hanukkah.’ His Hanukkah Lamp, Menorah # 7 (1986), which resembles a frozen explosion of anodized and chromed metal forms, was made at the suggestion of his friend Marvin Zeidler, who the artist jokes was “worried about my Jewish soul!” Shire still spends Hanukkah with the Zeidlers, and still lights his hosts’ Memphis Menorah.

Shire is best described as an artist who has designed functional objects as well as ‘gallery art’ and public commissions. While Shire’s furniture has a sculptural identity, he also makes sculptures that are interactive and useful. All across Los Angeles there are civic monuments by Shire, including his red and lime-green NoHo Gateway (2009) which spans Lankershim Boulevard in North Hollywood, and the hanging steel sculptures including angels and a unicyclist that amuse commuters in the Wilshire/Vermont metro station.

Los Angeles has a long tradition of transgressing boundaries between fine and applied arts. Before Shire, Peter Voulkos, John Mason and Ken Price made ceramics into art. For Shire, the distinction was moot. At Chouinard, he says, “the painting and sculpture students were the most boring bunch of people. Really uptight. The fun people were the design and fashion students.” From then on, Shire ploughed his own furrow, creating a hybrid career that is increasingly influential on a younger generation of artists. The New York gallery Derek Eller has just mounted a retrospective exhibition of Shire’s teapots and cups that displayed work non-chronologically from 1975 to the present. The oldest work looked every bit as radical as the most recent.

In summing up his aesthetic, Shire says “I wouldn’t quite call it Pop, but you might call it post-Eames,” referring to the famous Angeleno designers. He has never incorporated commercial imagery, as the Pop artists did; “I’m too much of a snob! I don’t care for the middle,” he says. “I want to be exciting. That’s what Memphis was all about – it will never be mainstream.”