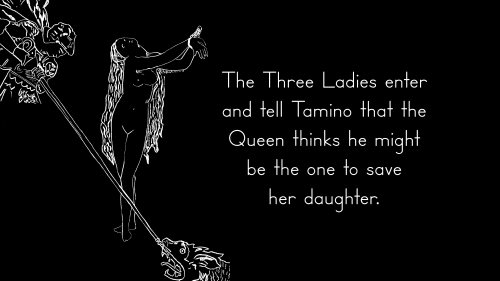 When artist Frances Stark was invited to participate in the prestigious 2017 Whitney Biennial, last year, she was in the middle of producing an opera. She had no time for interruptions. It was her first opera: Mozart’s Magic Flute, a re-orchestrated and retranslated version of which she recorded with a group of young musicians, and then turned into a text-based video with animated subtitles in place of the sung libretto. She considers the work – which premieres at the Los Angeles County Museum of Art on 28 April – an experiment in pedagogy, an educative experience both for the players and the audience. It is the most ambitious and collaborative production of the 50-year-old Los Angeles artist’s career.

Nevertheless, when the Whitney’s curators approached her she was “pretty riled up” about the current state of the world, a mood exacerbated by recent political events but rooted in Stark’s experiences at the University of Southern California, where she was a tenured professor until she quit, very publicly, in December 2014. Her grievance was with the corporatisation of higher education, specifically with the sidelining of the respected Roski School of Fine Arts in favour of the new Jimmy Iovine and Andre Young Academy for Arts, Technology and the Business of Innovation, which opened in 2014, funded by Young (better known as Dr Dre) and Iovine, his business partner in the Apple-owned headphone brand Beats.

Stark’s studio walls are covered with photocopied images and texts, one of which – an excerpt of an Observer column from 2013 by Stewart Lee – she pulls down to read. “The notion that thinking about abstract ideas like art and life might be an end in itself is being priced out of existence and legislated into oblivion,” Lee wrote. “In popular culture thinkers are despised.”

Though it can sometimes seem confessional or even solipsistic, Stark’s art has always been about “channelling other people’s voices”, as she puts it. Most of the collages, paintings, drawings, prints, videos and performances that she has made since the early 1990s include text of one kind or another: Stark’s own writing, passages by her favourite authors, snippets of junk mail or magazines, or letters arranged as concrete poetry. There’s a spontaneous element to her work usually, like the time she staged performance art influenced by the dancehall moves of “daggering” after meeting Skerrit Bwoy, one of its leading purveyors, on a cross-country flight. There’s the rise of her muse, Bobby Jesus, who has been involved in much of her recent work and is someone she met after approaching one of his acquaintances in an LA skate park.

Stark used her space in the Whitney Biennial to offer “a soap box” to another artist. She had recently read the polemical book Censorship Now!! by punk rocker and former Vice host, Ian F Svenonius, whose anger towards America’s corporatised and nationally sanctioned culture industry reflected her own. In the style of many of her past drawings and paintings, she copied – in paint, on large stretched canvases – the first chapter of her edition of Svenonius’s book, replete with her notes and underlinings. The text is a Swiftian argument in favour of censorship. “For art to regain any sense of its place in the world,” Svenonius writes, “it must live under the shadow of the cudgel and the blackout.”

It is fitting that Svenonius is a musician. Music has always existed on the periphery of Stark’s art, but usually only as a metaphor for performance. (Music stands, holding pages of her text, were a recurrent motif in her images for a while.) When she was about 10 years old, Stark took up the cello; lacking discipline or encouragement, she gave up after four years. Later, she played in a punk band. Around five or six years ago, Stark became curious, and somewhat uneasy, about the music – mainly chart hip-hop – that her son Arlo (now 14) was listening to. Some of it she liked, but she was critical of the amoral market forces that promoted it.

Stark struck up a correspondence with rapper and producer DJ Quik, an influential Compton rap figure like Dr Dre, but who lacked Dre’s business savvy and went to prison in 2006 for allegedly pistol-whipping his sister after she threatened to extort him for $2m and kidnap his children. When she read an article in which he expressed a frustrated desire to work outside of hip-hop, and to make art for art’s sake, she became convinced she could persuade him to collaborate. Invited in 2014 to apply for the Absolut Art Award, worth $100,000, she submitted a project proposal to make “a tragicomic, contemporary interpretation” of The Magic Flute with DJ Quik. She won.

The Magic Flute is significant to Stark because of its high/low appeal: a popular singspiel rather than a traditional opera, the work was meant by Mozart to be accessible (its title, after all, is a coarse innuendo) while its themes and form aspire to the transcendent heights of Enlightenment ideals. Stark says of the music, “It’s sacred! Not everything can be reduced to merchandise,” referring to Jeff Koons’ recent “cynical” launch of a line of handbags for Louis Vuitton.

Frustratingly, DJ Quik was not as easy to entice into collaboration as Stark had hoped. Instead, she commissioned the young classical conductor Danko Drusko (then a PhD student) to orchestrate the opera for an ensemble of musicians between ages 10 and 19, recruited from local youth orchestras. The legendary producer HB Barnum – an octogenarian who has worked with acts including Frank Sinatra, Aretha Franklin and the Supremes – was enlisted to produce the recording.

Stark wanted to involve children, many from underserved areas of LA, because playing in an orchestra has widely been proven to benefit young people who feel themselves to be marginalised or abandoned. “That feeling of being a part of a woven tapestry is amazing!” she says. She contrasts it with the contemporary reality of our neoliberal culture industry, especially for artists like herself: “hyper-alienated and hyper-competitive. Everyone is on their fucking own.”

She hopes her version of the opera will function for viewers as a study guide, a complementary work that will make accessible Mozart’s wit and ideas about fellowship and love.

“One of the reasons I got really enamoured with the Magic Flute,” Stark says, “is that I watched the Ingmar Bergman version with my son, when he was four or five. He was too young to read the subtitles, so I read them to him. When the movie was over – and this is a long opera – he said, ‘Can we watch it again?’” She adds, ruefully, “I don’t know whether he’ll sit through the whole thing now.”