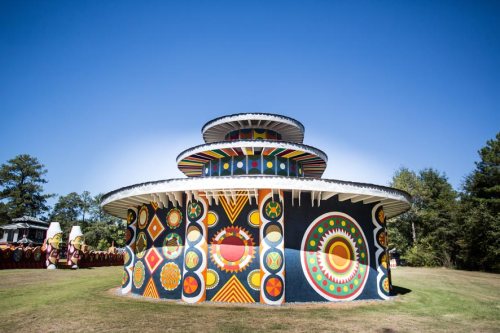 There are still plenty of people in Buena Vista, Georgia, who remember St EOM, as Eddie Owens Martin called himself following a feverish epiphany in 1935 that led to his rebirth as the emissary of a future race of spiritually advanced, possibly extraterrestrial beings. Until his suicide in 1986 at the age of 77, he lived alone on a mysterious and outlandish property called Pasaquan, hidden by tall bamboo and pine trees a few miles outside of town.

He was not exactly a recluse, though. St EOM (pronounced ‘Saint Ohm’) welcomed a steady stream of visitors who would pay him to have their fortunes read. He would also regularly venture into the small town to shop for supplies, or to attend church on Sundays. One lady remembers him arriving at Buena Vista’s Primitive Baptist church invariably late, jingling down the aisle in his homemade ceremonial robe and headdress adorned with bells, feathers, shells and beads to take his seat on the Martin family pew at the front. In the grocery store, he would terrify curious children by flashing them a snake (possibly not real) that he kept in his pocket. Other times, a rangy horde of cats would disembark with him from his Ford station wagon, stalking about the town square until he whistled them back on his departure.

One of seven children born to poor white sharecroppers, Martin fled Marion County and his abusive father as soon as he could, heading for New York City at the age of 14. There, he made a living first as a street hustler, but later – as his skills and interests were broadened by the queer demimonde of Jazz Age Manhattan – he sold marijuana, ran an illegal gambling parlour, and read tea leaves. His early years selling sex in New York were a crash course in human psychology: how to read people, how to spot opportunities, how to avoid danger.

After his father died in 1928, Martin returned intermittently to Georgia, helping his family bring in the corn and the cotton. On one such sojourn he fell ill, and after several days on his sickbed he had a vision of “this great big character sittin’ there like some kinda god, with arms big around as watermelons,” as he later recounted to Tom Patterson, his biographer. The great big character offered him a deal: follow him, and Martin could recover and go back into the world. Decline, and this would be “the end of the road.” Martin accepted, and the following morning began to get his strength back, along with a renewed sense of spiritual purpose.

Sometime later, back in New York, Martin began to dabble in drawing and painting. One day, while copying a newspaper portrait of Hailie Selassie, he had another vision of a similar being, who instructed him, “You’re gonna be the start of somethin’ new, and you’ll call yourself ‘Saint EOM,’ and you’ll be a Pasaquoyan – the first one in the world.” Martin immersed himself in the iconography and teachings of ancient civilizations, from the Egyptians to the Mayans, as well as more fantastic sources such as James Churchward’s spurious book about the lost continent of Mu. When he stopped cutting his hair and beard, his already flagging business as an aging hustler more or less dried up. St EOM didn’t mind. He was onto bigger things. 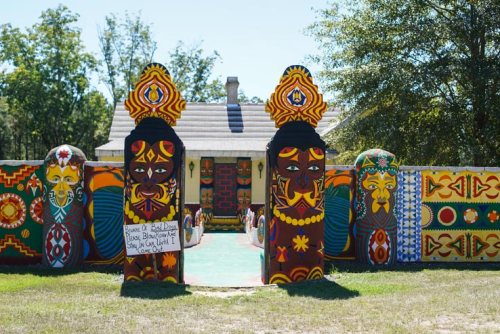 Martin’s mother died in 1950, and his trips home became more frequent. He would stay in her old farmhouse, though never bothered locking it during the months he was away. Instead, he made a figure of the Hindu god Shiva from cement, and told the tenant farmers that if anyone was to walk past it they’d fall under an evil spell and drop dead. He put it around that he was psychic, and so during his visits to Marion County he found he could make a decent living reading people’s fortunes with playing cards. In 1957, he left New York for good.

At first, Martin admits he didn’t know what he was doing when he started stockpiling rocks and stones from nearby fields and derelict houses. He built a low, unsteady wall in front of his house, then a great serpent, although the serpent didn’t turn out right so he abandoned it. He used cement to create reliefs of symbols and designs on wood, which he then incorporated into circles of rocks. Although he was not working directly from pictorial sources, he could see the designs in his mind. He said, “I knew they represented the universe and its forces and the great powers that hold all of this planet here together.” Just as his vision had foretold, he was building Pasaquan, the land of the Pasaquoyans, here in Buena Vista.

His designs synthesised iconography from American Indian, Chinese, pre-Colombian and African cultures, and also included the faces of people Martin knew – characters from New York such as Tillie the Toiler, Stella Dallas and Betty Boop, and the local labourers whom he occasionally paid to help with construction. It was ten years before Martin began to apply paint to the cement buildings and sculptures. Pasaquan today – especially after its recent renovation by the Kohler Foundation – is dazzlingly colourful, its palette inspired by Martin’s 1960s travels in Mexico. 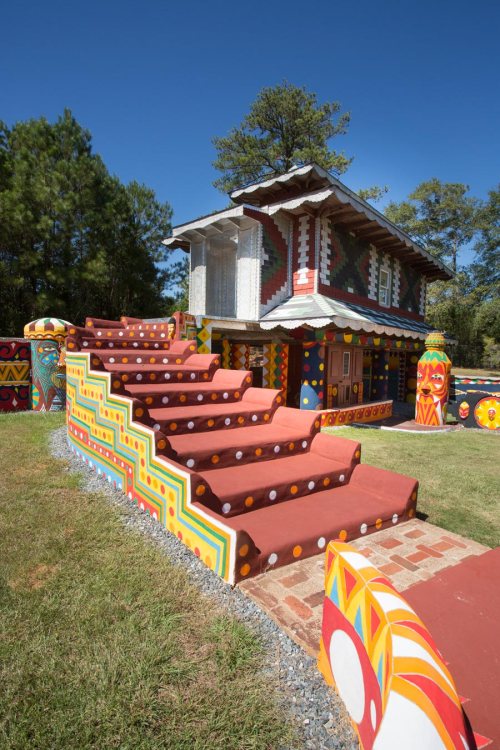 What did St EOM do out there, on his extraordinary property behind the sugar cane? Rumours thrived in Buena Vista, and some may not have been far from the truth. As Martin developed his persona, he tailored himself a wardrobe of extravagant ceremonial attire, and established private rituals that he routinely practiced in the Kiva, the pagodas and temples around Pasaquan. He gained notoriety and even some small success as a folk artist in the mould of Howard Finster, another self-taught Georgian artist with whom he exhibited, in 1977, at the Library of Congress in Washington. President Jimmy Carter twice visited Pasaquan (once before his presidency, and once after). St EOM told him he could see great things in his future.

Martin had once believed that growing his hair and beard would keep him eternally young, but time cruelly proved him wrong. By the 1980s he was battling manifold health issues, and after a particularly gruelling visit to hospital in 1986, he took matters into his own hands and shot himself in his bedroom at Pasaquan. It was his inability to continue making his art that frustrated him most.

“I built this place to have somethin’ to identify with, ‘cause there’s nothin’ I see in this society that I identify with or desire to emulate,” Martin once said. Pasaquan was his Utopia, a world envisioned anew, inspired by ancient knowledge and his hope for the future.

First published: World of Interiors, May 2018