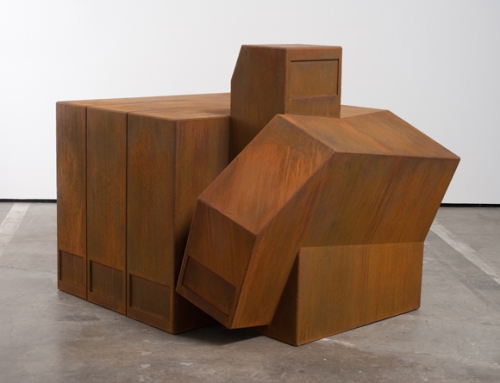 The unresolved debate around the work of Nathan Mabry seems to hinge on a question of belief: to what extent does Mabry mean what he says? Is the cynical humour and teenage innuendo in his work an expression of a mind deeply concerned with the unstable meanings and values of cultural artefacts, or is the artist just playing wilfully, provocatively dumb?

As if in a gesture of sarcastic contrition, a sculpture in Mabry’s exhibition at Cherry and Martin cries real tears. Weeping Figure (Déjà vu) (all works 2011) is in fact a faithful copy of Jacques Lipchitz’s Figure (1926–30), only with the addition of a hidden (but audible) water pump and a gravel base to catch the drips. What might the semi-abstract, Primitivist figure be crying about? Perhaps it has something to do with the barrenness of the cultural landscape she sees before her. Lipchitz drew inspiration from African talismans of fertility; he himself was from a generation for whom the onward progression of artistic development was fecund with promise. Today such faith seems like a bad joke.

Weeping Figure (Déjà vu) does indeed look out onto a vista of cruel debasement. Three female figures sit on black, Donald Judd-style plinths, their bodies formed from African D’mba masks (also symbols of fertility and motherhood) smeared in clay, and their faces fashioned from assorted plastic sausages. They are saddled with the demeaning titles Tête de Femme (Spicy), Tête de Femme (Juicy) and Tête de Femme (Plump). Between them, painted white in contrast, teetered The Week of Kindness: an upside down sculpture of Romulus and Remus suckling the teats of a she-wolf, herself stuck inside a car tyre á la the goat in Robert Rauschenberg’s Monogram (1955–9), and holding up a large white metal box with some wicker baskets on top. It is a confounding sculptural proposition, and far harder to dismiss as a knowing art-historical gag than were the three sculptures nearby.

Although Mabry’s appropriated sculptural elements are no less pedestrian than Rauschenberg’s (if one can call a stuffed goat pedestrian), here they are somehow sadder, devoid of Monogram’s anger and abjection. Patches of off-white applied to the metal box could be Sherwin-Williams paint samples, or careless attempts to erase graffiti – further invoking Rauschenberg, via a conflation of his collaged Odalisk (1955–8) and Erased De Kooning Drawing (1953).

If The Week of Kindness can be understood as a kind of inverted sculpture – the plinth on top, the founders of Classical Roman civilization upside down, below – it also seems to invert its own presence in the gallery. As a negative, it almost disappeared next to the positives around it – the heavy-bottomed, black female figures on Judd-ite plinths. Next door, Amulet (Mano Figa), a rusted steel block that brought to mind a hacked up version of Tony Smith’s Die (1962), was another positive – an incontrovertible, scowling mass of matter in the middle of the room. A mano figa (or fico, or fica, depending on who you’re speaking to) is an ancient obscene hand gesture (fico is the Italian word for fig, a fruit thought by the Romans to resemble a vulva and so associated, you guessed it, with fertility and procreation). It is also, in many cultures, replicated as an amulet, for good luck. The sculpture in the gallery was, I eventually recognised, a cuboid hand poking its thumb between first and second fingers. At me, I can only assume. Whether it was telling me to fuck off, or wishing me good fucking, I do not know. Perhaps it was simply a case of a naughty boy scrawling ‘SEX’ in crayon on the museum wall. I hope not, but I don’t expect Mabry to provide reassurance anytime soon.