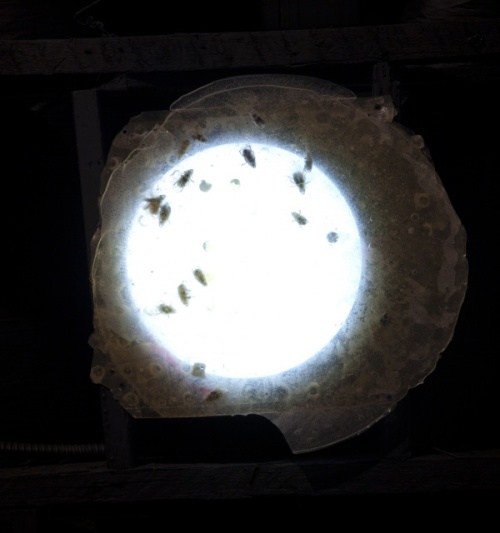 Sometimes artists’ biographies become so central to the reception of their art that they threaten to overwhelm it entirely. Michael E. Smith’s association with the blighted post-Fordist city of Detroit has become almost impossible to separate from his tender but trashed sculptures, paintings, videos and installations.

That is a shame, because Smith is an outstandingly sensitive artist who can fine-tune the dynamics of a space with the delicacy of Robert Irwin or Fred Sandback. Content need not precede experience. In this, his first solo exhibition in Los Angeles, he ushers the visitor into the gallery with an untitled right-angle of scuffed plastic and matting leaning against a wall. It looks like a jawbone. Another sculpture, Cats (all works 2011), is similarly positioned at a corner butting into the space; consisting of two pieces of brown foam, one balanced on the other, it quivers in the cold breeze of the air conditioner.

Despite its title, Cats’ can hardly said to be figurative, but it does activate the space with a living presence. Up above, Smith has fixed an untitled puddle of foamy, clear plastic over the skylight, with cockroach corpses embedded in it. It infects the entire room with an undead pallor. The only other light emanates from three spotlights shining on the wall above three plastic bowls. The lights are the traffic-light colours of red, yellow and green. This is the only explicit reference to the automobile culture for which Detroit – and Smith’s work – is known, and, in its formal and referential frontality, it is perhaps the weakest work in the show.

The most effective moments arrive thanks to Smith’s orchestration of atmosphere – a surprising quality in deliberately pathetic, post-Minimal art. The rear gallery is a case in point: a black shape (apparently a ‘plastic garment bag’) obscures half the skylight, and a strip of blue polythene jerks nervously in the current from an air conditioning outlet. An arrangement of white plastic curves in one corner resembles an animal skeleton, increasing the gloom. All these works are untitled, and it is hard to imagine what title could add to their impact. Sometimes, words fail.