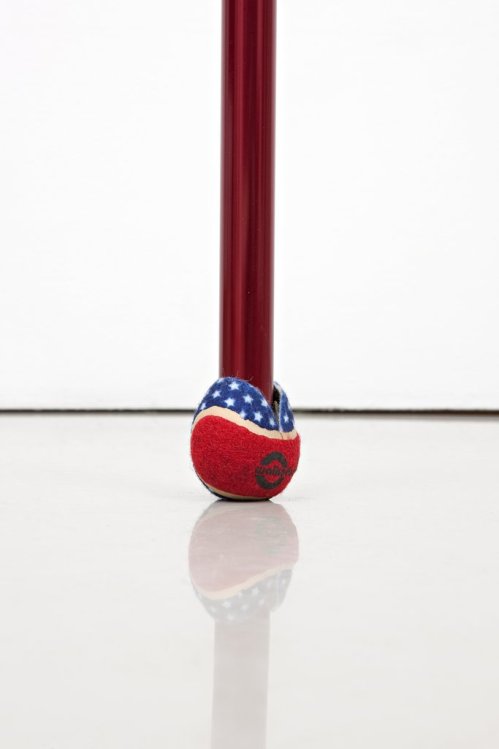 What is the significance of the fact that ‘walker balls’ are only available for purchase in the United States? They’re not sold in Canada, not in the UK, not in mainland Europe or Asia. Only in the US do manufacturers of tennis balls diversify by producing differently coloured and pre-cut balls to fit on the end of walkers (known in other countries as mobility aids or Zimmer frames) in order to facilitate their smooth and scratch-free shuffling across polished floors. Is the salient point here about the integration of medical equipment into American homes? The commercialization of geriatric invalidity? The expediency of customized design? Maybe the interesting thing is the way in which an inexpensive, makeshift addition is so quickly repackaged and marketed? Or is it to do with the meagre ways in which US consumers are happy to assert their individuality, be it with pink, blue or zebra-patterned balls on the legs of their walkers?

Chadwick Rantanen’s work is not, primarily, concerned with national politics or socio-economic conditions. The Los Angeles-based artist set out with far purer, even theoretical intentions: to make a work of art that was entirely benign; one that left no physical trace on the space it was exhibited in and which could be adapted to the dimensions of any average-sized gallery. He modified a telescopic aluminium pole, the kind used for window-cleaning brushes or tent-poles. At each end he affixed a grey walker ball (chosen to colour-match the metal) that braced the pole, at maximum extension, between the floor and the ceiling of the gallery. He soon made more, with different ends and differently coloured, textured or sand-blasted surfaces. From the start they were conceived not individually but as part of a range.

The objects are easily transportable, erectable and dismountable. What’s more, in an exhibition context they are visually reticent. Like Barnett Newman’s zips or Fred Sandback’s yarn vectors, they oscillate between asserting themselves as figures in the foreground and receding as gaps or spatial incisions. In pictures (and perhaps too in our imaginations) they lean towards the latter; in reality, their fragile relation to our clumsy bodies tilts them towards the former. These are awkward, shy sculptures; Rantanen has spoken of them as ‘fighting visuality’.

Their aesthetic indeterminacy was compounded when he added decorative patterns to the poles; at first these were simply taken from found images, modified for the purpose. The designs were applied to the aluminium with an anodized dye-sublimation process that literally fused the image with the object. The images – multi-coloured bows, or tartan – were intended to be as innocuous as possible, the pattern’s repetition ensuring that viewers needed to see no more than a small area to establish that the rest of the object was essentially the same. There were no surprises here. In one instance, the artist created a perforated sticker printed with images of various kinds of metal finishes. The tautology of matching the image to the support was, for Rantanen, a way of prioritising neither.

For a group show at Clifton Benevento, New York, in 2011, Rantanen covered part of a pole with a pattern excised from another artist’s painting that hung nearby. The sculpture, convolutedly titled Untitled (Sanya Kantarovsky, Untitled, 2011, Oil & watercolor on linen, 33 x 26 inches) (2011), fused outward acquiescence to its surroundings with a disconcerting parasitism of Kantarovsky’s work. It appeared to display an embarrassing obliviousness to the social conventions of the group show, according to which each artwork should compliment – rather than upstage or undermine – the others in the space. (This was not, in fact, the case; Kantarovsky is a friend and colleague of Rantanen, and consented to the appropriation.)

It became clear, therefore, that Rantanen was working to expand the ways in which an artwork is expected to behave – and, more to the point, to misbehave. The seemingly infinite available strategies for subversion within contemporary avant-garde creative practice, he realized, are in reality pretty homogenous, long institutionalized by art schools and museums. The most radical option might instead be to fit in, to not make a fuss and to work within a limited palette of given options rather than to try to break new ground. To work inward rather than outward.

It made sense to draw from those spaces that had similar (though perhaps differently intentioned) aesthetic agendas: corporate lobbies, commercial premises, public institutions and hospitals. Untitled (Glass) (2010) was an installation inspired by those decorative elements from corporate environments that are installed where an artwork would ordinarily belong but which have none of an artwork’s troubling uniqueness. These are made from coloured sandblasted glass, fixed to the wall with brushed steel pegs. Glass, in sheet form at least, is typically designed to be looked through rather than at; these panels of anaesthetic green, blue and grey frame only the blank wall behind an inch of empty air. Each one tilts to the left and hangs at trouser height, as if not to get in the way of the more important zone of eye-level wall above. The fixtures and sand-blasted borders are varied, but not varied enough to warrant an investigation of the entire sequence. Seeing one is the same as seeing them all.

Rantanen began increasingly to reflect on the visual language of hospitals; unlike corporate headquarters, whose visual priority is to confidently signal wealth and power, hospital décor is intended to soothe, to be unobtrusive, to not interfere in the healing of the patients. It is designed to help. The walker balls that he was using on his telescopic pole sculptures are a somewhat ad hoc domestic extension of this aesthetic. He sourced as many different kinds as were commercially available, and found that in addition to their quiet functionality, they are produced in different colours and patterns. The design of the balls – whether zebra-striped or camouflaged – dictates the colour of the aluminium poles. ‘The balls tell me what to do’, says Rantanen.

By setting up an experimental system, and then adhering to its rules and parameters, what is Rantanen uncovering in these works? Sure, there remains his initial model of an artwork that sets out to do the exact inverse of what is expected of it, thus forming a dry critique of the function that art might take in today’s post-avant-garde culture. Rantanen refers to them as ‘models for thought’, and perhaps he would prefer them to remain as such. But the specificity of the balls’ designs, and, as already mentioned, the subsequent revelation that they are made purely for the US market, surely point to real-world truths about these objects that perhaps even the artist never foresaw. For instance, who decided that the limited options for establishing one’s individuality through a walker ball would include a military camouflage pattern as well as the Stars and Stripes? That some of the colours are, in his words, ‘horribly ugly and obnoxious’. Or that, despite the artist’s hope that the lightweight objects would (like André Cadere’s Barres du bois) be easy to transport, their length makes them expensive and inefficient to ship in standard-sized containers. It does not take a huge leap to see metaphorical parallels between the practical shortcomings of Rantanen’s one-size-fits-all system for self-individuation and the socio-political landscape of modern America.

But such observations should not, in Rantanen’s work, be understood as conclusions so much as evidence of the timeliness of his methods. A separate untitled series of fervid abstract pen drawings seems to embody the very attributes – wild, untrammelled self-expression – that his other projects rigorously avoid. That is until one realises that the drawing is almost identical to the one hanging beside it. In Untitled [Drawings #31] (2011), for instance, the same gestures have been repeated across eight sheets of mylar, drawn with a single packet of pens taped together into a giant unwieldy bundle. Despite the drawings’ fragile, Twombly-esque beauty, as with all his work Rantanen seems to be asking us to look away or move along: there’s nothing to see here.