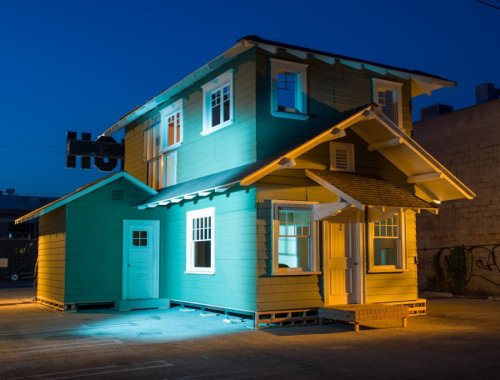 The doubling begins immediately. An exhibition across town, organized by MOCA and James Franco, called “Rebel,” themed (incredibly) around Franco’s resemblance to James Dean, finds its evil twin in “Rebel Dabble Babble.” It began with Franco inviting Paul McCarthy to collaborate on a project based on Rebel Without a Cause (1955), and ended up with McCarthy and his son Damon creating house-sized sets in their studio, staging auditions, filming, and performing in scenes with actors (who played hybrids of cinematic characters and the actors who originally played them) and, ultimately, shooting scenes for a pornographic version of Rebel Without a Cause featuring an actor named James Deen, who, like Franco, is a dead ringer for its original tragic star. A watered-down version of the project remains in MOCA’s exhibition, but at The Box it unfurls into full exhaustive glory.

The main gallery is a dimly lit cacophony of yelling, coital grunting, and howls. Video projections fill the walls and, in the middle of the room, a two-story stage set, a replica of rebel Jim Stark’s home in the film, lies on its side. The first two projections, though differently edited, have the same long title—Fuck you, Pillow Talk, Staircase Argument, Stunt (Bungalow), Threesome, Red dress, Stunt (Bungalow) (2011–12)—and feature actress Elyse Poppers playing Judy / Natalie Wood, Franco as Jim / James Dean, and Paul McCarthy double doubling as both director Nicholas Ray and Jim’s father. Subsequent scenes (some played by stunt doubles) move from violence to infantile affection to frenzied carnality. When visitors are eventually disgorged into the gallery’s parking lot, they meet a full-sized, roofless, clapboard cottage with an upside-down Hollywood sign affixed to its back.

It took me a moment to realize that this was not a second version of Jim’s house, but Nicholas Ray’s bungalow at the Chateau Marmont, where he lived while shooting Rebel Without a Cause. (Oddly, but not insignificantly, this particular bungalow is two storied.) It is apt that Ray was assigned Bungalow Number Two—just one of many doubles, binaries, and inversions that structure the legend of his film. For Dean and the 16-year old Wood, both of whom hailed from unhappy families, the residence became a surrogate household with Ray as its unconventional patriarch. Rumors abound of quasi-incestuous affairs between the director and his actors, of swimming pool orgies and champagne bathtub freak-outs. It is these scenarios that are the basis for “Rebel Dabble Babble.”

Of course, Rebel Without a Cause is itself the story of adolescents searching for alternative familial structures and parental models. The question posed over the years by film critics, biographers, gossipmongers and, indeed, the McCarthys is not how accurately fiction mirrors life but how, exactly, life relies on fiction for its shape and form.

The backstory of the movie is a gift to Paul McCarthy. His engagement with it here reflects a shift, however, in his work away from fantastical tropes (pirates, Pinocchios, and Santas) to historical and pop-cultural narrative, such as his recent Pig Island (2003–10), featuring George W. Bush and Angelina Jolie. Despite the liberties taken with the lines between fact, speculation, and rabid fantasy, “Rebel Dabble Babble” has an incontrovertible immediacy that is bound up with its foundation in truth (what, in Los Angeles, is simply local history) as well as the realities of its contemporary context. (It is no accident, for instance, that The Box is run by Paul’s daughter, Mara.)

It seems inevitable that McCarthy should end up working with hard-core pornography, a medium with which his performances have long flirted. The adult actors, however, here function as stunt doubles hired from Hollywood’s (and performance art’s) parallel economy. Real, performed sex is distinct—though analogous—to the real, performed mania of McCarthy’s stage persona; when we watch the 67-year old artist writhing, naked, in a bathtub full of custard with the beautiful and lithe Elyse Poppers, we think: this really happened. The occasional incursion of a camera lens or microphone into the frame reminds us that the first witnesses to this action were the film crew, led by McCarthy’s own son.

James Dean was a famous adherent of Stanislavsky’s Method. While McCarthy would never term his actions “acting,” there is likewise a troubling and thrilling closeness between the personas he occupies on camera and his subconscious self. However, like certain method actors, McCarthy is ever in danger of self-parody. In this exhibition, he appears in convincing disguise, shorn of his distinctive beard and wearing a grey wig, but his horny grown-up baby routine is unmistakable. Like every actor in “Rebel Dabble Babble,” he is deliberately playing many different personas at once, his own included. That he is able to acknowledge and subvert these roles—artist, father, director, rebel, icon—so clearly in this project is testament to the still gathering complexity of his work.