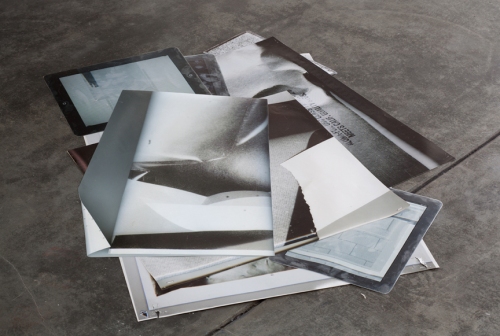 One day, someone will curate an exhibition of antique digital art that features iPhones, iPads, Photoshop effects, email threads and inkjet prints. The glass and chrome gadgets will seem hopelessly quaint. (‘How did we ever carry this stuff around?’ we’ll ask each other, incredulously.) The work of Andrea Longacre-White will probably be included in the show.

In the artist’s current, nonhypothetical exhibition ‘The existing term has become inadequate’, black and white inkjet prints of scanned iPads and re-photographed MacBook screens already bear on their dirty surfaces premonitions of imminent dilapidation. In her hands they age more quickly than for other owners: Longacre-White reportedly never cleans the screens of her digital devices. The forensic muss of white fingerprints, smears, scratches, hair and dust that accrues over her images originates from both the scanner and the scanned.

For this exhibition, the artist photographed the bare bricks of the gallery walls, and emailed the resultant pictures to herself. She scanned her iPad with the emails open, the scanner’s heat tricking the iPad into thinking it was being touched and causing interference from other pages. Sometimes she photographed the screen of her laptop while she Photoshopped the scans. In the final prints, we glimpse sections of brickwork only behind clouds of visual white noise and through concentric frames and windows.

With her wall-mounted works, she chooses to dampen their representational echoes with frames of stained white wood; the effect is to create an artificial limit around art works that might otherwise chime, in muted tones of institutional critique, with the dark steel detailing of the chic gallery space. After all, where do the edges end? The aesthetics and ethics of Apple Inc now pervade all aspects of our lives.

By contrast, four piles of prints are placed directly on the gallery’s concrete floor. They lack the presence of the framed ‘PadScans’, as the artist terms them, but they make up for it in conceptual acuity. The prints stack up less like windows on a crammed computer desktop than junkmail on a doormat. The paper itself is allowed to crease or tear, unlike the framed prints, so as to foreground the physical quality of these representations of the digital void.

All this mise-en-abime might seem a little chilly, were it not for the sense of humanity that warms the exhibition. Aside from her omnipresent fingerprints, Longacre-White herself is on hand, in audio form, to talk viewers through the work should they wish to dial into a recording on their iPhones. An incongruous hanging rope made from tied-together pillowcases offers a cartoonish escape route from the exhibition’s conceptual echo chamber. Viewers following it to its top will see, however, that it goes nowhere, disappearing only into the gallery’s white ceiling. Longacre-White’s work is inflected with many such disappointments – most at technology’s failure to emancipate us from our present realities.