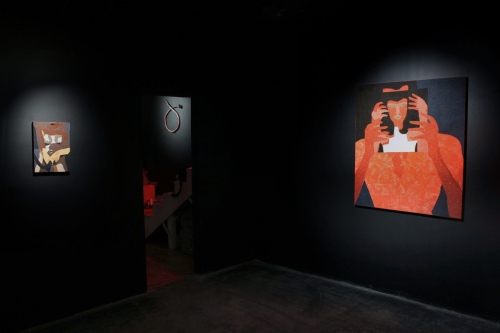 A blacked-out gallery, with opening hours of 10pm to 2am, is liable to give the art on its walls a certain transgressive frisson. Night Gallery is such a location. For more than two years, it has staged exhibitions in a space that seems more like a club than a gallery. ‘Upbraid’ by Alika Cooper – the final show at its original Lincoln Heights premises before it moves into whitewashed architecture and daytime hours – both plays up to and dissents from the louche tone of the space.

Cooper is, outwardly, a rather conventional artist. Her pictures are collages made from pieces of quilting fabric; their prim patterns and dowdy earth tones make it difficult, at first, to perceive that the scenes they describe often relate to flagrant immodesty. Here a woman is holding a hosepipe, or maybe a horsewhip, to her crotch; there a naked female is bending over on all fours. Cooper’s baggy shapes, however, somehow imply the opposite of nudity. Her lines are not figure-hugging; instead she cuts loose puddles of fabric that, more often than not, float over rather than conjoin with their neighbouring forms. Comparably evasive are a series of ceramic tobacco (or weed) pipes by the artist Anna Mayer, shown in the gallery’s annexe. The extravagantly long tubes curl into loops (also reminiscent of whips or hoses) and are decorated with patterns and looping statements such as ‘I am living at the very heart of a culture and sub-culture.’

Cooper’s collages are all based on photographs of women, most by Helmut Newton, but others by Brassaï and Man Ray. Whereas those photographers made their penetrating exposures in crisp black and white, Cooper covers up her figures with rogue fields of coloured pattern and abstraction. Expressive but inexact drawing – as with a collage like Fur Rug (all works 2012), which shows three figures up to who knows what – creates circumstances in which the action is no longer titillating or exhibitionist but mystifying, even arcane. The work becomes exclusionary; we will never know why two figures seem to be wearing masks, or why one is clad in a sweater but nothing below the waist. (Is that what the title refers to?) It certainly doesn’t feel particularly sexy.

There is something ritualistic about many of these images. Cooper refigures Man Ray’s famous photograph of a rope-tied statue,Venus restaurée (Venus Restored, 1936), into a fabric collage of an armless figure who wears her scant bondage like jewellery. In the innocuously titled Vignette, two female figures face each other on all fours, blonde hair flailing but otherwise seemingly frozen. The work derives, reportedly, from Newton’s photograph of a woman smothering a man with a pillow. Here, the women (without their quarry) seem absorbed in their own solitary games, or punishments.

Exactly where Cooper stands on Newton’s objectifying imagery is never re­vealed. Her responses are measured, ambivalent and perhaps more engrossed with their own visual dynamics than with attacking the ethics of their sources. Cooper inhabits the compositional structures of Newton or Man Ray and fills them with something new – something that is about not revelation but privacy, evoking interior warmth rather than the chill of public nakedness. That itself is a political act.

Quilting, traditionally, has been a way to rehabilitate otherwise useless material into a form that is designed for trans-generational longevity. Perhaps it is useful to think of Cooper’s collages as aiming for something similar, using instead of fabric these photographs that we no longer know what to do with.