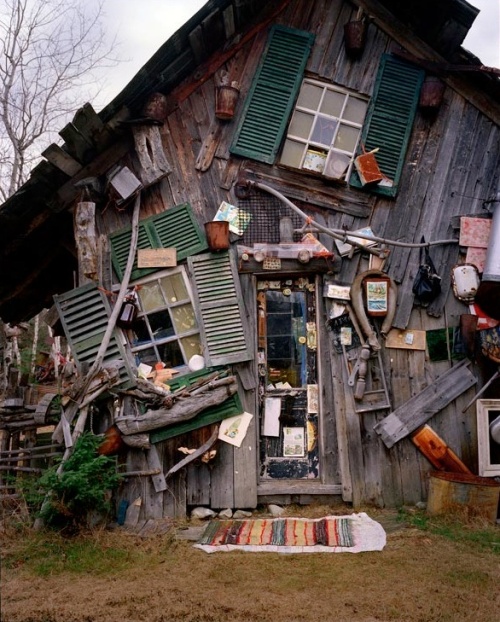 Richard Greaves turned his back on the city in 1984. In Montreal he had studied hotel management, graphic design and then theology. Unfulfilled, he packed his bags and settled on a mile-long strip of land in the Quebec backwoods that he had purchased some years before with a group of friends as a weekend getaway. The plot, when they bought it, was untouched save for two modest houses at one end, beside an unpaved track. Greaves began to build.

At first, it was enough for him simply to make a home for himself. But within five years, passersby noticed strange totems in the trees and on the ground around the property. These constructions were made from household refuse: bits of broken computers, sports equipment, clothing, washing machines, cookers, and so on, bound together with string or wire.

Greaves became more ambitious. A friend of his, a local artist and poet, was making a living by dismantling old wooden barns on farms and reassembling them, refurbished, for private clients. Greaves would often help him. Sometimes there were barns for which they could not find a home; Greaves brought them back to his land where he used their heavy old beams as the frames for new sculptural shelters and, later, actual houses, each more elaborate than the last. At one point, in the mid-2000s, there were ten separate buildings and another ten shelters on Greaves’ land, and he was becoming widely known as a visionary – though isolated – artist and architect. By 2009, however, he had fled, abandoning his remarkable constructions to the entropic forces of weather and decay. Today, most have returned to the earth.

Greaves’ studies in theology, and his closeness to his devout mother, have contributed to a unique spiritual philosophy. Broadly speaking, Greaves is an animist, one who sees his own body and the material world as existing within a single continuity. In one of his buildings, he explained his beliefs in a handwritten note, attached to the wall: “I really liked old objects and observing them – objects that had been used, objects eroded by the force of time and inhumane histories. I think of myself as no different.” Elsewhere, he wrote: “I perceived that they were like individuals. Many were in good company, while others were in poor surroundings.”

It should come as no surprise, then, that Greaves is incensed by the wastefulness of contemporary life. On recycling day, he would trawl the local curbs for undeserving refuse that he could rescue and knit into the fabric of his buildings. Not all of it was structural; soft drinks containers, election placards, road signs and books appear both as interior and exterior decorations. Greaves’ animism also led him to avoid, wherever possible, nails and screws, preferring to lash together planks of wood with blue and orange baler twine. “With twine, it’s fun because it still moves. It lets me structure a building without hurting or assaulting it. A nail is like a splinter. It’s iron against wood; it’s immoral.”

Consequently, Greaves attended to the buildings every day, making repairs and improvements, reacting to the wind, rain and snow that battered them into ever more asymmetrical shapes. Adopting what art historian Roger Cardinal has called “utter scorn for orthodox building methods,” he deliberately avoided right angles, and borrowed his architectural forms from nature rather than pure mathematics. (In this, he is not alone; Antoni Gaudi, Alvar Aalto, Isamu Noguchi and Oscar Neimeyer have all been variously inspired by nature’s indifference to right angles.) Inside Greaves’ Maison ronde (Round House), four trees grow up from the floor and out through the roof.

Valérie Rousseau, Curator of 20th-Century and Contemporary Art at the American Folk Art Museum, New York, believes there is another reason for the wonkiness of Greaves’ buildings. She describes the dynamic experience of entering a two-storey construction such as La Cathedrale (The Cathedral). “You have to duck and bend and climb to get through or round parts of the architecture. It is like a game.” She adds, “Play is a very serious thing for him.”

Greaves had been profoundly affected by the death of his partner’s young daughter, in a car accident, around the time of his first sculptures. “I do it for the children, not the adults,” he has said. “I don’t trust adults.” In some instances, as with La Maison aux fenêtres (The House of Windows), children have contributed drawings directly to the surface of the building. Others, such as La Maison des trois petits cochons (The Three Little Pigs’ House) or La Maison sucrée (The Sugar House), are inspired by fairy-tales. 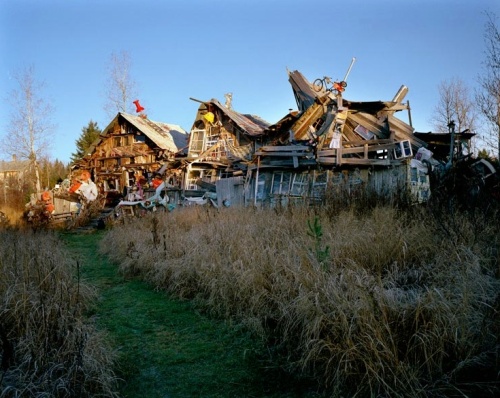 Rousseau co-curated the first major exhibition of Greaves’ work, in 2005, and has written about it for the catalogue of the Hayward Gallery’s current exhibition ‘The Alternative Guide to the Universe’, in which Greaves is included. But when she first encountered the artist, surprising him at work, he ran in the opposite direction. “Not a social person” is how she describes him. The photographer of the images reproduced here, Mario del Curto, patiently formed a relationship with Greaves by camping on his land before he won permission to photograph the buildings.

There are figures throughout art history with whom Greaves can be compared: members of the 1970s’ ‘Anarchitecture Group’ including Gordon Matta Clark, for instance, or Kurt Schwitters, whose Merzbauten were similarly eccentric, evolving environments. In ‘The Alternative Guide to the Universe’, however, Greaves appears alongside visionary outsiders such as Achilles G. Rizzoli and Marcel Storr, whose fantastic architectural designs were – and never will be – built. Greaves can legitimately be termed an Outsider artist, Rousseau argues, because his work is not in dialogue with the rest of the world. There is no give and take here; Greaves is “only giving.” When his co-owners joined him on their land, he was unable to adjust to living in company. Just as Simon Rodia, architect of the Watts Towers, Los Angeles, left his life’s work at the age of 74 never to return, so too Greaves moved away, leaving his work behind him. While his current whereabouts are unknown to us, the likelihood, according to Rousseau, is that he has simply picked up and continued his idiosyncratic mission elsewhere.