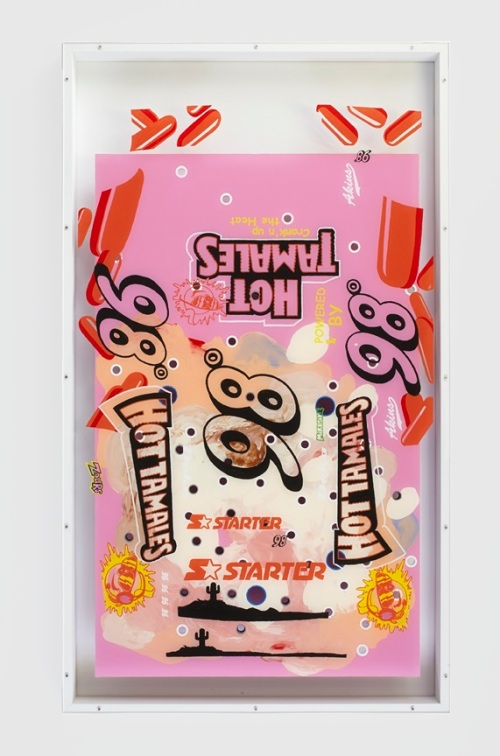 Sean Kennedy is not a great painter. His brushwork is hesitant, his mark-making is sloppy and inconsistent, and his colouration, though vivid, seems uninterested in harmony. Against these odds, however, he has created a suite of great paintings. If indeed paintings is what they are.

Fifteen large panels make up the Los Angeles artist’s show, titled ‘Mixed Messages’. Mixed, they certainly are; messages, not so much. Kennedy’s process was identical for each of the untitled works (all 2013). Onto rectangular panels of clear acrylic, he copied, in paint, the sheets of decals produced for model racing cars. Anyone who has ever made an Airfix plane or Tamiya radio-controlled buggy will be familiar with these sheets. Anyone who hasn’t should imagine all the logos, graphic insignia and other details from a scale model arranged, with the maximum spatial economy, on a piece of transfer paper.

Once these logos are scaled up and copied out, Kennedy glues objects such as cereal packets, lottery cards or plastic dishes to the acrylic panels. Many are the kinds of articles that come packaged in blister packs: Pez candy dispensers, toothbrushes, light bulbs and USB drives. These packs are fixed, their card backings torn off, directly to the acrylic. All are new.

The final stage of preparation involves Kennedy brushing colourful, expressive and unevenly adept abstractions over both the graphics and the affixed objects. When the panel is hung paint-side to the wall, all three layers are simultaneously visible, the last to be applied appearing the furthest back. However muddy the wet-in-wet paint occasionally becomes, when applied to the flawlessly smooth acrylic, it assumes an almost textureless –  one might even say graphic – quality.

In a chatty, first-person press release, Kennedy reveals that he considered many terms to describe this body of work: ‘Lid paintings, sandwich paintings, window paintings, decal paintings, container paintings, graphic paintings, layer paintings, improvised paintings.’ In the end he chose ‘graphic paintings’ because of the word’s multiple associations. Ironically, its first dictionary definition as ‘shown or described in a very clear way’  may be the least applicable here. These are images of confusion, of registers of information so tightly sandwiched that they become aesthetically and materially indivisible.

In a recent untitled series of sculptures (2010–ongoing), Kennedy arranged diverse objects on acrylic panels, which he then suspended horizontally from the ceiling. Those works, which refer more to the conventions of image-making than sculpture, clearly inform the new paintings. Both bodies of work bring to mind computer desktops, and correspond to the familiar digital experience of overwhelming arrays of information organized in an intuitively visual way. As with horizontal sculptures seen from underneath, Kennedy’s paintings have no top or bottom; they may be hung by their owner any which way, emphasized in this exhibition by the horizontal installation of several of the works in order to make better use of available wall space. In this respect they recall iPads, which automatically reorient their screens however they are held. Since the logos on the paintings are arranged in all directions anyway, there is no single angle from which they should obviously be read.

One effect of this is that the text quickly becomes abstracted, dissolving into insignia, the graphic schema of glued-on objects and, finally, Kennedy’s vigorously painted backgrounds. It is remarkable how many of these decals – a large AT&T logo, for instance, or the splashy design scheme from a Porsche – already emulate painterly brush marks. As a result, it is easier to think of them as pictorial incidents than as promotional signs for goods and services. While the entire spectrum of capitalist enterprise is represented here – from oil and energy, engineering, telecommunications, food, fashion and entertainment –  I start to forget who makes what. (Are DeLonghi the tyre people or the toaster people? QVC looks heroic, until I remember it’s a shopping channel.)

This calculated disorientation has the effect of emptying the images of message. That is not to say they are ambivalent, but they are so consumed by the multiplicity of information that they do not allow the viewer to hold any single thought about them for very long. When Ashley Bickerton made Tormented Self-Portrait (Susie at Arles) (1987–8), a comparable work that combined logos both real and invented to make an ironic self-portrait, he obviously intended it as a barbed critique of consumerism. Kennedy’s process, by contrast, has more in common with Robert Rauschenberg who,  in his ‘Combines’ of the 1950s and ’60s,  folded his critical position into a process of non-hierarchical aesthetic dérive.

Kennedy’s paintings are bright and unthreatening. Like the logos they appropriate, they transmit information quickly and digestibly. They photograph well. They wag no critical fingers either at their viewers or their owners. But up close, at first hand, they slow down, and their optical complications (intensified by reflections on the acrylic) may begin to induce mild panic, or nausea. Kennedy shares what Rosalind Krauss described as Rauschenberg’s ‘equal horror of meaning and of emptiness’.