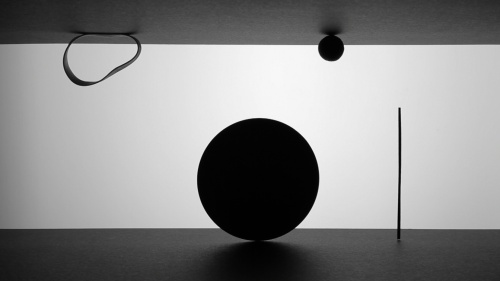 Upstairs in the polished, air-conditioned and usually deserted corridors of West Hollywood’s huge Pacific Design Center, time seems to move at a slower pace than on the noisy summertime streets outside. Where better, then, for an extensive survey of the patient studio experiments of Melbourne-based video artist Daniel von Sturmer?

The exhibition, Focus & Field, is curated by Paul Young, who has for several years been staging ambitious shows of moving-image work in the capacious showroom that he occupies in the building. The 20-odd works, dating from the past five years, necessitated Young annexing an additional empty space nearby. The exhibition divides naturally into two sections: a selection of older works made between 2008 and 2013, then across the hall a new body of work, Camera Ready Actions, from 2014.

For those less familiar with von Sturmer’s art, it makes sense to start with the earlier work. The Cinema Complex (2010) is a series of short videos, five of which are shown here backprojected onto translucent screens no bigger than a flat-screen monitor. (This is worth noting because von Sturmer proves acutely sensitive to his videos’ sculptural and painterly qualities; he rarely projects them at immersive scale onto walls.) In The Cinema Complex, von Sturmer contrives simple material effects in front of the camera that nod, in a noncommittal abstract way, to the structural conventions of cinema. In one video, offset coloured discs of paper revolve on a turntable, like one of Marcel Duchamp’s Rotoreliefs (1935). In another, we see the artist’s hand placing objects – a rubber band, a cork ball, a Styrofoam cone – on top of one another, where they balance in defiance of gravity.

As far as I know, von Sturmer’s magical effects are not achieved with postproduction trickery but with a steady hand and perhaps a dab of glue here or there. Broadly speaking, The Cinema Complex videos are about illusionism, and are themselves illusions that often give themselves away. More affecting is an earlier video, Set Piece (Sequence 4) (2009), in which the artist’s unseen hand uses a stick to prod groups of objects, like a ball of Blu-Tack, an orange pompom and a hexagonal column, into precariously balanced arrangements. It is excruciating, then elating, to watch this mini-epic of failure, perseverance and triumph.

Von Sturmer’s most recent works, Camera Ready Actions, forego such romantic reflections on the frailty of the body and the pathos of gravity. Instead, they deal with empirical measurement; they are demonstrations rather than experiments. In one video the artist proffers a sequence of test cards and rulers. Elsewhere he tapes a black frame onto a white background, continuing until the screen is entirely black.

Frames and supports certainly seem to be on von Sturmer’s mind here; he has recruited Hollywood carpenters to build freestanding scenery flats against which he leans monitors and throws projections. While his output may be growing more conceptually determined over time, it is the quixotic earlier work that keeps me rapt – those videos that feel like von Sturmer has time to kill, and nothing particular to say.