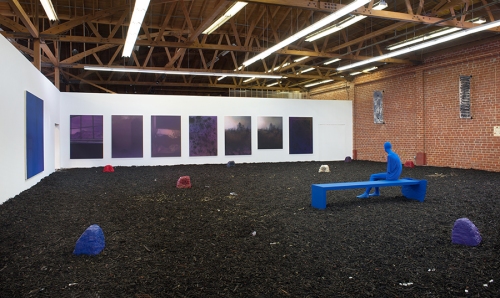 Someone has cut a large hole in the chain-link fence that separates Los Angeles’s François Ghebaly Gallery and Night Gallery. Perhaps eight feet in diameter, it is large enough to drive a car through and at the opening of concurrent recent exhibitions by Sayre Gomez (at Ghebaly) and JPW3 (at Night), the circumference of the hole was dressed with burning incense sticks, like a low-fi ceremonial portal from one dimension to another.

The hole is #4 (2014), an intervention by John Connor, the fictional artist invented by Gomez and JPW3 (a.k.a. Patrick Walsh) to whom they attribute their collaborative projects. The pair also run a project space in the studio building that they used to share, named Patrick Gomez 4 Sheriff. While it is obvious that both artists enjoy making mischief around issues of individual authorship (John Connor, of course, is played by different actors throughout the Terminator franchise), their solo exhibitions are distinct entities, and any resemblance between the two is, as they say in the movies, purely coincidental.

Which is remarkable because the parallels between the exhibitions are numerous. Both artists could be described primarily as painters, although they both situate their paintings here in a broader material context, which includes sculptures, installations, and sound works. In Gomez’s exhibition, a line of tightly hung paintings presides over a carpet of dark, trash-flecked mulch; fake plastic rocks hide speakers quietly emitting songs by Eminem and Jay-Z. On an immaculate blue bench, a blue mannequin sits and gazes facelessly into space. At Night Gallery, JPW3’s soundscape (made in collaboration with Daniel Pineda of music groups Nguzunguzu and Future Brown) is the opposite of Gomez’s aural wallpaper. Large speakers brood ominously, then suddenly erupt in a cacophony that seems to include crashes and squealing tires. He too has benches, although his are little more than planks covered in thin foam, and rise only five inches off the ground. Unlike at Gomez’s show, visitors are permitted to sit on them. 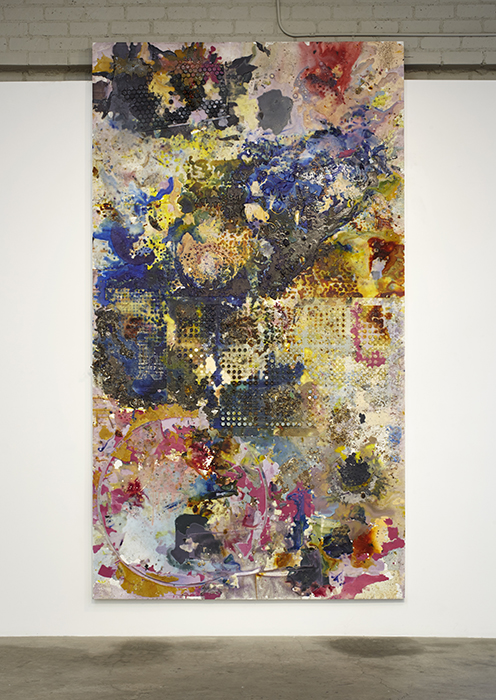 Both artists produce work that calls attention not so much to a finished result than to the process that generated it: in Gomez’s case, that process is a signature marbling effect that he achieves by dripping paint wet-in-wet on a horizontal surface; for JPW3, melted wax is a binding agent that incorporates found images and objects, as with the magnificent painting Marco Polio Portfolio (all works 2014) which rises 12 feet toward the ceiling but was clearly made on the floor, catching the run-off from other wax sculptures.

Gomez and JPW3 are both prolific, and in light of the varying quality of their output in these well-stocked exhibitions, could justifiably be accused of over-production. This is all the more troublesome considering that they are amongst a class of young male artists reaping the rewards of an inflated market for large abstract paintings. For many of these artists, however, the market is not only a fact of life but a connecting node in their conceptual frameworks. Making large paintings quickly and with relative ease—a well-worn provocation—is only the most obvious, and least interesting, manifestation of its influence. JPW3 has often appropriated the Ferrari stallion logo—a symbol of wealth, but also a signifier of technical or physical perfection, one that he deliberately undermines in his unkempt art. Instead of the cool lines of the Ferrari bodywork, it is the heat, noise, and speed of the engine that informs his practice. At the back of the gallery, a craps table (ZZ Craps), ready for gambling, is an ambivalent nod to the current speculative art market.

Gomez’s exhibition is titled, sardonically, “I’m Different.” Although his paintings (unlike JPW3’s) might be described as tasteful, the notion of individual taste seems everywhere to be under interrogation. The rock speakers—the kind installed in outdoor malls—are collectively titled Hypnotic Presence of Popular Music in Southern California and broadcast a Spotify playlist compiled by Mark Zuckerberg. The photographs incorporated into Gomez’s paintings, including mountain landscapes and windows, are mostly appropriated from social media, and have no special aesthetic merit. Two adjacent paintings, Untitled Painting and Untitled Painting, II, show a particularly dreary landscape, identically rendered in soft airbrush but with the latter canvas extended downwards to include a strip of marbled purple and black abstraction. It is a neat but cynical trick—a kind of either/or conundrum that implies that ultimately neither is necessarily superior to the other. In Generation Gap, the Beatles’s 1967 song title All You Need is Love is stenciled above Kurt Cobain’s 1994 B-side I Hate Myself and I Want to Die. It is a yin-yang of positivity and nihilism, each side processed beyond recognition by the commercial culture industry. Ambivalence wins the day. These two exhibitions, separated by a chain-link fence, also seem like two sides of the same cultural coin.