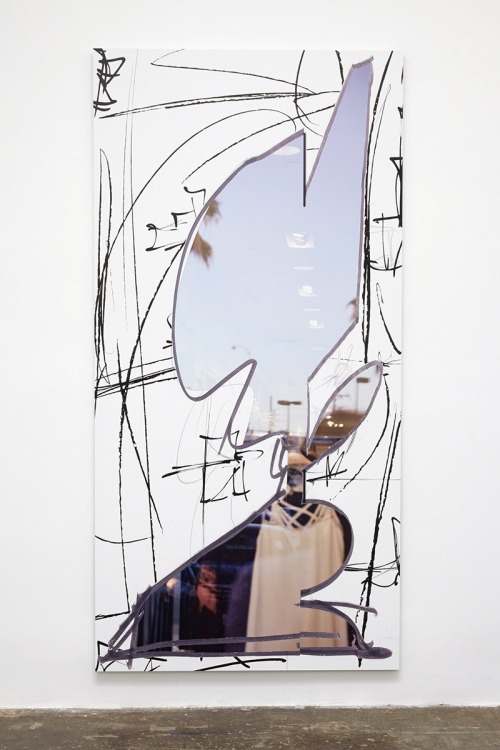 When I was a kid, big-box department stores were exciting beyond words. There were so many places to hide–dark spaces under garment racks, slim gaps behind curtain displays, voids behind stacked boxes–that I would have happily played inside all day. I used to fantasize about getting locked in at night, hiding from security guards (it would have been easy) and then tearing around alone, bouncing on mattresses and skidding across polished floors, or making a den in the sporting goods section.

To be honest, as an adult, when I’m in those kinds of places I still have these thoughts. I’m fairly confident that Aaron Garber-Maikovska does too. His latest exhibition, Sidesteps and Outlets, continues his ongoing pursuit of freedom (of what might be termed radical play) within the confines of the determined and manipulative landscapes of late-Capitalist consumerism.

Garber-Maikovska’s mission is complicated because he is, fundamentally, a painter, and he makes works that are currently enjoying success in a market favoring large abstract paintings. He makes a lot of them. It will never be realistic for him to claim a critical position for his current works outside of consumerism.

Perhaps, then, it is best to first consider the video that is projected above a doorway in a corridor between the gallery’s main space and its office. It is a spot that many artists would steer clear of, but Garber-Maikovska is fond of awkward, overlooked spaces. The looped video, just under three minutes in length, is titled JC Penney Lamps (all works 2015) and shows the artist in the home furnishings department of a large store, behaving in a manner that would have raised the concern of any passing security guards or sales assistants. The term performance seems inaccurate for what Garber-Maikovska does in the video, because there is little that seems ostentatious or projective about his demeanor; he furrows his brow and looks only at the space immediately in front of him, although his motions do, at times, have the grace and deliberateness of dance. He appears to be measuring negative space with his body: gently launching his hands or arms from surfaces of walls, display stands and goods, tentatively tracing shapes in the air before coming to rest against other forms.

Garber-Maikovska’s unique style of movement, which he has developed through live gallery performances as well as in videos filmed in chain restaurants and mall parking lots, is a deeply internalized imaginative language. It is as if he is thinking in space. Once you have digested one of his extraordinary videos or performances, it is impossible to see his pictures as anything but extensions of this language.

His drawing style—fast, expressive lines often executed in marker pen—shares an aesthetic with graffiti, and this only reinforces the idea that Garber-Maikovska’s paintings have something to do with the kind of quiet resistance demonstrated in his public-private guerilla performances. Their calligraphic qualities liken them to secret text, rendered in script that is both diaristic and exclamatory. Maps and architectural plans also come to mind. The edges of his surfaces (modern povera materials like foamcore gator board and fluted polypropylene) become the constraints that he pushes against with his drawing.

Sidesteps and Outlets includes three tall paintings: black line drawings done in ink and acrylic on ten-foot sheets of gator board, all untitled. Although these works look hand-drawn. They are in fact inkjet prints from small sketches that are scanned, edited and enlarged; the artist then carefully fills in certain lines with a brush, just as Franz Kline finessed his apparently gestural paintings. Three further paintings, each containing a silhouetted figure the artist has named Ben (Open Ben, Reflection Benand Islands Ben) are also inkjet prints, in this case combining line drawings with photographs shot in malls.

In this exhibition’s most significant departure for the artist, viewers can walk through two concertinaed tunnel structures made from fluted plastic sheeting. Each is about the height and width of the tallest paintings, and on their outsides, more Bens are printed. These uncertain objects are neither quite architecture nor images, and their awkward placement in the gallery does nothing to clarify their purpose. Though they bear no resemblance to any part of a conventional building, they become a smart critique of crazy contemporary mall architecture: paper-thin structures, drop ceilings and false walls, full of empty air, more pictures than shelters, quick to build and quick to dismantle. There is little meaningful distinction in such places between inside and out; the interior is a public arena just as the exterior is completely controlled and supervised.

Garber-Maikovska’s work is not so much critical as propositional. That is to say that he does not seek to demolish the systems and structures that he references—he can’t, since he relies on them just as much as anyone—but instead he looks for spaces of imaginative possibility and freedom within them. His work could not be called ‘anti-Capitalist’. He wears Nike sneakers like the rest of us.