Collage, it could quite reasonably be argued, was the most influential cultural innovation of the 20th Century. When Georges Braques and Pablo Picasso first affixed bits of patterned paper and oil cloth to their paintings, they changed Western ideas about artistry and authorship forever. They opened a door in aesthetics to appropriation – what would also come to be called sampling. Without collage, there would be no Grandmaster Flash, no Public Enemy. Probably no Lady Gaga. There would be no Frank Gehry or Rem Koolhaas, no Vivienne Westwood or Karl Lagerfeld. The Las Vegas Strip and the Dubai skyline would look very different.

Nevertheless, collage has long been considered a marginal medium. One of collage’s pioneers, perhaps the first to devote himself purely to the technique, did not even like to call himself an artist. Joseph Cornell, the subject of a major new exhibition at London’s Royal Academy, preferred to think of himself simply as a maker. His artistic forebears were not Braque or Picasso but the Victorian scrapbookers who pasted clippings of illustrations and photographs into albums. At the kitchen table of his white-painted, clapboard home at 3708 Utopia Parkway, in Queens, New York, he would toil through the night while his mother and disabled younger brother slept upstairs. 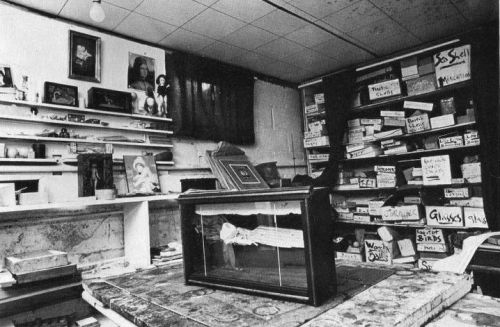 That is not to say that he was oblivious to the professional art scene of mid-Century New York. Over the years, the legend of Cornell’s reclusive and eccentric character has come to overshadow his involvement with, and considerable contribution to, the avant-garde of his time. He was far from an outsider. In the 1930s – at the start of his career – he became friends with Surrealists Roberto Matta and Dorothea Tanning, not to mention the photographer Lee Miller and the godfather of Conceptual art, Marcel Duchamp. He discussed his work with the painters Piet Mondrian, Willem de Kooning and Mark Rothko, and Robert Motherwell was one of his most vocal champions.

They were captivated by Cornell’s peculiar wooden constructions and paper collages, similar in spirit to the work of the Dadaists and Surrealists, many of whom had emigrated to New York in the lead up to the Second World War. In 1932, the dealer Julien Levy invited him to participate in the exhibition ‘Surrealisme’, at his gallery on Madison Avenue. Cornell presented collages cut from pictures in old books: a schooner, for instance, its main sail replaced by a gigantic peony, at the centre of which is a spider’s web.

Cornwell would come to disavow his association with the Surrealists, even after accepting an invitation to take part in a ground-breaking survey of the movement at the Museum of Modern Art in 1936, curated by its firebrand young Director, Alfred H. Barr Jr. He wrote to Barr: “I would appreciate your saying that I do not share in the subconscious or dream theories of the Surrealists. While fervently admiring much of their work I have never been an official Surrealist, and I believe that Surrealism has healthier possibilities than have been developed.”

Later in 1932, Levy gave Cornell his first solo exhibition. ‘Objects by Joseph Cornell: Minutiae, Glass Bells, Shadow Boxes, Coups d’Oeil, Jouets Surréalistes’ included much more than collages, most notably the shallow, glass-fronted boxes containing arrangements of objects and images for which Cornell is now best known. These objects were neither paintings, in the conventional sense (though they hung on the wall), nor sculptures. Levy called them “toys for adults”, hinting that, like Cornell, he was not entirely sure whether they could – or should – be called art.

Despite this rather patronizing designation, Levy had recognized an important quality in Cornell’s work. Memories of childhood were a wellspring of reverie for the artist, and many of his sculptures and pictures contain a sense of innocence and wide-eyed sincerity. Cornell remained fond of penny arcades and sweets throughout his life. When the Californian dealer William Copley visited Cornell in 1948 to propose an exhibition in Beverly Hills, he took the artist out for lunch. “He looked hungry,” Copley later recalled. “Afterwards he asked if he could have an ice cream soda. He seemed afraid we would say no.”

When Cornell was 13 years old, his father died, leaving the family in considerable dept. As the oldest sibling, it fell to him to support the family, and when he turned 18, without graduating high school, he joined his father’s profession, finding a job as a textile salesman in Manhattan. On his lunch breaks he would scour nearby second-hand bookshops, flea-markets and dime stores for materials that he could incorporate into his art. He was a formidable autodidact, and his diverse obsessions suffuse his work: he studied astronomy and the cosmos, natural history and mathematics, poetry, architecture, opera and ballet, illusionism, ornithology, aviation and cinema.

In 1940 Cornell decided to quit his job and to devote himself fulltime to art. He moved from the kitchen table to the cellar, which he transformed into an immersive Wunderkammer of raw materials and evolving creations. Photographs taken in 1972 by Hans Namuth, at the end of Cornell’s life, show homemade shelves reaching from the floor to the ceiling. They sagged under cardboard boxes stacked every which way. Large and small, each was labelled in midnight-blue painted lettering: “sea shells”, “plastic shells”, “cording”, “Dürer”, “owls”, “angel hair”, “tinfoil”, “Caravaggio etc”, “watch parts”, “love letters / Jennifer Jones”, “stamps”, “marbles”, “notions”.

Such an array of materials might suggest that little fell outside of Cornell’s imaginative purview, even that he was scattershot in his interests. But brought together in a wooden box or pasted in a collage, these diverse elements evoke a singular sense of wonder, a yearning for distant times and places, that is Cornell’s alone.