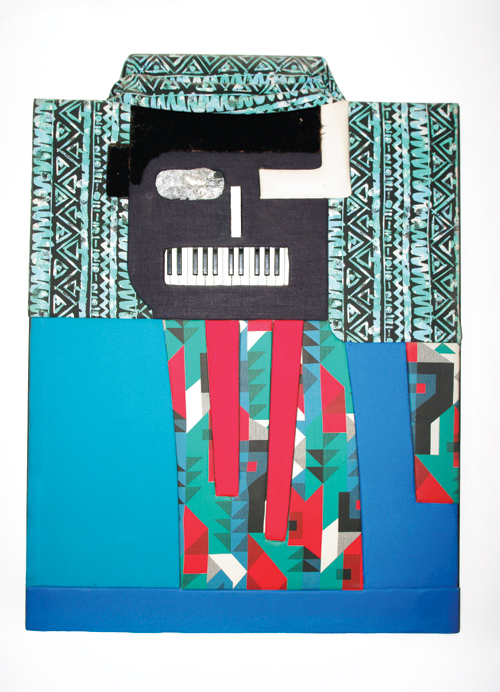 There are two entry points – architecturally but also thematically – to ‘Junk Dada’, the exhibition of sculpture by Noah Purifoy housed on the top floor of Renzo Piano’s Broad Contemporary Art Museum, at LACMA, curated by Franklin Sirmans and Yael Lipschutz.

One approach encounters Purifoy first and foremost as a politically motivated artist. To the right of the entrance lobby, the visitor is welcomed by his sculpture Sir Watts II (1996), a faceless and armless torso with a spiked military helmet and a chest of exposed electronic components. The grim effigy is a remake of a lost sculpture made by Purifoy in 1966, the year after the Watts Rebellion in south Los Angeles, where he was the director of the Watts Towers Arts Center. The material aftermath of the riots compelled Purifoy and a group of other artists, including Judson Powell and Arthur Secunda, to mount an exhibition of ‘junk art’ (their designation) titled ‘66 Signs of Neon’ (1966).

Righteous fury throbbed beneath the surface of those charred wood and melted-metal assemblages – some of which are shown in ‘Junk Dada’ – but ‘66 Signs of Neon’ was not an overtly politicized show. Instead, it was a gesture of spiritual defiance against the entropy that threatened to subsume the embattled community. Purifoy later said: ‘I am more concerned with the act of creating than I am with the art itself.’ An object’s physical presence or visual impact – not to mention craftsmanship, finesse or composition – are subordinate, he suggests, to the affirmative significance of making something – anything – out of nothing.

Visitors turning left in the lobby, however, are presented with quite a different story. The first work they meet is Purifoy’s Untitled (Bed Headboard) (1958), a warmly rounded amalgamation of brown wooden forms, which he made while working as an interior and furniture designer – an unusual line of work, in mid-century California, for a black man. As is amply demonstrated by the art works that follow, Purifoy was a skilled craftsman, effortlessly capable of making objects that popped off the wall or fizzed with visual energy. Many make reference to jazz and the blues. Black, Brown and Beige (After Duke Ellington) (1989) is a funky abstract improvisation in the key of found wood, arranged in three stanzas. He referred to these wall-mounted works – also including zingers such as Earl Fatha Hines (1990), a portrait of the jazz pianist made from interlocking shapes of padded fabric with a keyboard for a mouth – as ‘collages’.

I first encountered Purifoy’s work at the Joshua Tree Outdoor Museum: a ten-acre plot of land that the artist began populating with his art in 1989, at the age of 72. When he died in 2004, the site was arrayed with rangy structures made from salvaged wood, corrugated steel, rebar, sticks, tires, bowling balls, toilets, pieces of air-conditioning duct and other junk. Several of the strongest desert constructions have been transferred to the museum specially for this exhibition, and installed on sand-topped plinths to signal their re-categorization, in Robert Smithson’s terms, from site to non-site. The tone of these works – such as No Contest (Bicycles) (1991), in which two bicycles teeter on an inclined plank atop a shingle-clad wall – is quixotic, gently ironic and unconcerned with message. Two are installed outdoors, and look excellent juxtaposed against Piano’s museum architecture. Most are located in the ‘66 Signs of Neon’ side of the exhibition; surprisingly, perhaps, because they date from after the period, between 1972 and 1988, in which Purifoy became disillusioned with the political agency of art and worked instead as a social worker and, later, as a policymaker on the California Arts Council.

These distinct phases of Purifoy’s life were bridged by a controversial installation he presented in 1971, at Liemert Park’s Brockman Gallery, titled ‘Niggers Ain’t Never Gonna Be Nothing – All They Want to Do Is Drink and Fuck’. This overwhelming, abject environment represented the home of a ten-strong African-American family, with live roaches, rotting food and a fetid toilet. It is represented in ‘Junk Dada’ only by a row of photographs, sequestered in a room not far from Purifoy’s wooden headboard. The question begged by this exhibition is how the two paths through the artist’s oeuvre intersect. Purifoy himself was not convinced that they did. Throughout his life he sought to keep his social activism and his artistic production separate; he once referred to it as a ‘double consciousness’. How much more rewarding it is, however, to consider them as mutually galvanizing, as Sirmans and Lipschutz seem to. Interior design is re-envisaged as a radical act; sculpture made from the debris of riots becomes a formal exercise and a philosophical enquiry; an isolated desert existence is the unlikely culmination of a life spent on inner-city streets.