Modelling the surface of a picture into a 3D relief, with contours that boost the image with real shadows and highlights, is a technique so crassly obvious that it is a wonder you don’t see it more often – not only in art but in visual culture in general. Why not, in order to snag the attention of easily distracted viewers, just make images that physically pop out from the wall?

One answer might be that, since the Renaissance, Western picture-makers have generally aspired to achieve an illusion of depth through line and form alone. For centuries, to disregard that tradition was seen to be at best naïve, at worst philistine. Another possible answer is that a relief is an impractical object, unrollable and unstackable, while an image on paper or canvas benefits from easy transportability. Another might be that – especially with bas-relief work, where the sculpted forms are shallower – the viewer often has to stand directly in front of the image for the illusion to snap into effect. From the side, it falls apart.

Gina Beavers embraces these shortcomings in the 3D reliefs that she makes from unpigmented acrylic medium, painted with a topcoat of colour. All of Beavers’s paintings are copied from photographs and most of them conform to the square format used by – and today commonly associated with – the photo-sharing app Instagram. The most obvious thing to say about Beavers’s work is that it is a response to the ephemerality of social media and that, in a literal sense, she is re-endowing the images that are trafficked within it with a stubbornly physical heft and a decidedly non-photographic tactility.

Despite appearances, however, Beavers’s work is not principally concerned with photography or even technology. Instead – and this is something that has become increasingly clear over the past six years or so, since she became known for this technique – she is a painter reflecting on painting, on its cultural status and on the qualities and limitations that are unique to the painted image. In the age of Instagram, she is asking: why make a painting at all?

In her most recent solo exhibition, ‘Popography’ (2015), at Michael Benevento in Los Angeles, her pictures were full of brushes, palettes and pots of colour. They depicted an alternative kind of painting entirely, though: the application of make-up, represented by before-and-after tiled images that are common within the Instagram sub-genre of make-up tutorials. By and large, it was eyes that were being painted. Maquillaje (Make-up, 2015), for instance, showed the six-step process required to transform a woman’s eye into a smoky, black-lined explosion of iridescent green and purple. Day look (2015), on the other hand, achieved a more modest effect although – with 12 steps requiring different tools and colours – one no less exacting. In two paintings showing elaborate nail art, Mona Lisa nail and Skull how to (both 2015), eyes look back at us from fingernails painted with faces.

In a room containing several of these paintings, the sensation of being watched is striking. But, actually, these are eyes that are asking to be looked at. Not only are they submitting themselves as visual aids for a demonstration (‘Here, look, do it like this!’) but are also, simultaneously, aspiring to make themselves more eye-catching. They are preening displays of virtuosity and imploring appeals for desire or, at the very least, approval. Is that an analogy for the convoluted dance that an artwork performs before its viewer, shuttling between supplication and didacticism, seduction and an aloof self-assuredness? In Beavers’s paintings, the body is often conflated with the artwork, soliciting the gaze of others but also anxious to control it or deflect it through illusion. Many of her earlier subjects were photographs of body-painting, such as Gator (2012) in which a woman has an alligator painted onto her legs and torso that appears to be swallowing her whole. In Mondrian (2012), Beavers presses the point home with a picture of a woman whose naked body has been painted with black, red, blue and yellow rectangles, and who is holding a gilt frame around her shoulders. (There are occasional men, too, but in Beavers’s work the desired and the desiring subjects are, more often than not, young and female.)

To her credit, Beavers never goes so far as to turn her paintings into metaphors, but they have embedded within them self-reflexive thoughts on the power of images both high and low. Her undergraduate education was partly in anthropology, and her inclination to frame both her source material and her own output within the long view of the disinterested anthropologist lends her an objectivity that serves her well. Like Mike Kelley, who extracted philosophical and humanist insights from folk culture and kitsch (often while satirizing the pretensions of modernist art), Beavers never patronizes the tastes or proclivities of the people from whom she appropriates.

Beavers became best-known for paintings that are translations of photographs found on Instagram with the hashtag #foodporn. Food has always been a penetrating lens through which to view sociological mores, but liberal, middle-class America’s current obsession with artisanal, locavore gastronomy – and its aestheticization – has surely already spawned any number of PhD papers. Beavers has remade photographs of marbled meat (Local White Dorper Lamb, 2013) and shellfish (A pot of Mussels at La Gare, 2012) as well as Lobster Roll(2013), Mini Chocolate Bundt Cake (2013) and Oysters at Grand Central (2012). But amongst these delicacies are less rarefied offerings: Food Porn! (Chicken & Waffles) (2012) depicts a mountain of orange batter while Applebees! (2012) presents us with a platter of fries, coleslaw, ketchup and yet more fried chicken. Beavers mainly sources images from people she follows online, so these dishes are as likely to have been snapped by her gallerist as one of the students she used to teach at a Brooklyn high school.

None of these pictures, I should add, is particularly appetizing. Something about the rough, matt texture of acrylic paint always looks either too viscous (in the case of a lettuce leaf, for example) or too dry. While Beavers has occasionally added pumice, porcelain or glass beads to her paintings to conjure crust or crumbs, she stops short of using glossy varnishes. Consequently, her painterly highlights on the skin of a strawberry or on the glistening flesh of oysters, though skilful, when overlaid on an extruded form simply sends the not-quite-simulacrum into the realm of the uncanny valley.

Beavers generally chooses photographs that were meant to be slickly appealing – sexy, appetizing or beautiful – and usurps their makers’ aspirations. Two notable exceptions are Basket of Carburetors and Nice Shot (both 2014), the latter depicting two stubbed-out cigarettes in an ashtray. Both paintings achieve the reverse – they make ugly images rather attractive – and are demonstrations of Beavers’s mastery over her paintings’ affect. Whatever we feel in front of her work, she intends us to feel. She is particularly drawn to images – whether dubious-looking hotdogs or a grotesquely muscled male torso – that are skidding off the edge of attractiveness into a queasy hinterland. By remaking them in visceral 3D, she helps them on their way.

There is a process of doubling and redoubling that occurs in Beavers’s paintings which results in objects that are not – as with much self-reflexive, contemporary art – hollow mises en-abyme but, rather, densely folded wads of meaning. Sometimes, the back-and-forth is almost too much to keep track of. A painting of a painting on a body, photographed and disseminated by thousands of other people through the internet and then reincarnated (to stick with the bodily analogies) in ‘meatspace’ as a singular, heavy object with a painted skin: this step-by-step description of Mondrian might also fit any number of her works, although to untangle its significance is likely to make your head spin. 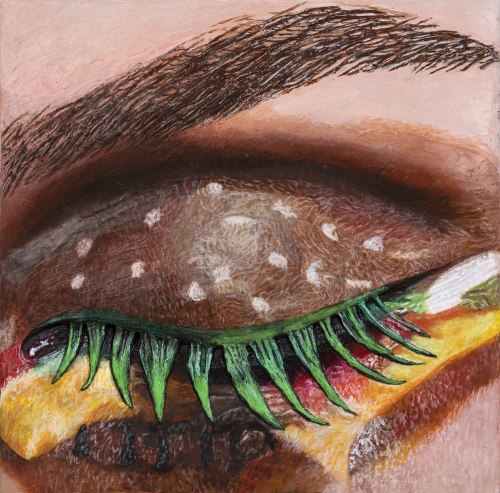 In many cases, Beavers seems deliberately concerned with polluting categories and perverting the normal processes of visual apperception. Food porn is a case in point: something meant to be smelled and tasted becomes nourishment for the retina. In the brilliant Burger eye (2015), a woman’s closed eye is made up with green mascara and brown and yellow eye-shadow to look like a burger. Who wants their eyes to resemble something edible? Another recent make-up-tutorial work, Halloween eyes (2015), is a square panel divided into sections. Two eyes are positioned above two pairs of lips, creating a nightmarish face. On the lips, additional eyes and a jagged mouth have been painted – presumably with lipstick – in the style of a carved pumpkin. The levels of tautology in the painting are astonishing and hilarious. Beavers has even fashioned eyelashes from paint – as she did with many works in the series – by letting thick layers of acrylic dry on glass, peeling them off and then slicing them into thin strips.

I have a sense that this doubling – this consumption and reconstitution of material, these analogies of rapacious digestion and excretion – reflect profound truths about contemporary digital culture. Beavers, who was born in 1974 and is not an internet native, may simply have internalized these ideas in her pursuit of a theme for contemporary painting. Once begun, her project has assumed a life of its own. A painting of a chicken in brown sauce, accompanied by a corn cob wrapped in foil, takes its title, like all her paintings, from the caption accompanying the original Instagram: Memphis BBQ  (looks like a Gina Beavers) (2013).