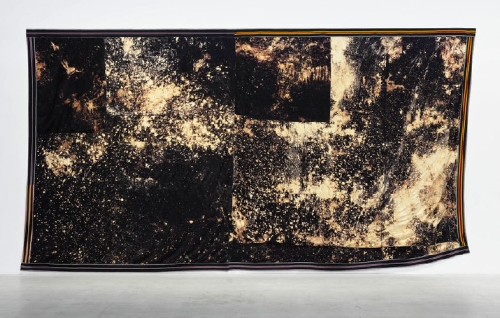 I am waiting for Sterling Ruby in a supermarket parking lot on the east side of Los Angeles, and wondering what kind of car he drives. Black Range Rovers and Teslas are popular with successful artists in LA. But the 44-year-old Ruby projects something of the image of a showman, so when a custom 1980s Cadillac with chrome rims pulls in, I think for a moment it might be him. On the other hand, Ruby is a father of three, so perhaps pragmatism wins out: a Mercedes estate or even — who knows — a Volvo.

Ruby was only three years out of art school when he caught the international art world’s attention with a densely hung exhibition called SUPERMAX 2008 at the Museum of Contemporary Art in Los Angeles. Over the past decade there has been no let-up in the furious pace and ambitious scale of his production: dripping red urethane stalagmites; stuffed fabric sculptures; abstract canvases in smoggy spray-paint; gloopy, cracked ceramics; collages; patchworks of dyed fabric. A 2015 show of cosmic, bleached fleece wall-hangings at Gagosian in Paris also included sections of a salvaged submarine.

Next month, Sprüth Magers Berlin opens The Jungle, an exhibition of Ruby’s mobiles. These works recall the hanging sculptures of Alexander Calder, except that Ruby balances cut-out steel shapes with objects such as baseball bats, lengths of chain, steel drums and buckets — many of which he finds on the streets of Los Angeles. Together, we are driving around the places in the city that have shaped his thinking and his distinctly urban aesthetic.

Eventually a sleek black Porsche Cayenne draws up, and Ruby’s wife, the artist Melanie Schiff, a softly spoken woman in yoga pants, hops out. She will be photographing our journey. She and Ruby became friends when they were students in Chicago, in 2000. They eventually married in 2012, and now have two children, along with Ruby’s oldest daughter from a previous marriage.

Despite portraits that often show Ruby scowling in a bandanna and heavy work boots, in person he is relaxed and genial, with kind eyes and a couple of days of stubble. When he gets out at our first stop — the duplex apartment he rented when he first moved to the city, in 2003 — I notice that the label on his acid-washed jeans reads “SR STUDIO LA CA”. Since 2008, Ruby has made studio workwear for himself with offcuts from fabric sculptures; in 2014 he collaborated with designer Raf Simons on a full collection of menswear.

We are in Mount Washington, a middle-class and faintly bohemian enclave to the north-east of Downtown. Despite its proximity to what passes, in Los Angeles, for the centre of town, parts feel quite rural and neglected. “This used to be a dirt road,” Ruby says. “It was like a scrapyard.” In a dusty gulch beside the steeply rising road, Ruby filmed parts of his first major video work, Transient Trilogy (2005).

“I grew up in the middle of nowhere, in Pennsylvania,” he says. “I always had this fear of cities. I even moved to Chicago because I didn’t feel like I could go to New York. So when I moved out here, and experienced the hillsides, the dirt roads, the wildness, it felt good, familiar.”

Next year, Ruby and his family will move back to Mount Washington, to a house they bought four years ago and have been extensively remodelling. At the top of the hill, San Rafael Avenue is shaded by stately oak trees. His future home, currently a timber skeleton, was designed in 1909 by the company responsible for the Self-Realization Fellowship headquarters two blocks down the street, as well as the famous Grauman’s Chinese and Egyptian Theatres in Hollywood. “The house would have fallen down in the next big earthquake,” he says. “But we felt a responsibility to the community not to build some crazy contemporary architectural thing.”

A coyote jogs beside the car as we head back down the hill. We pass another house, with a façade like a red prairie barn, where Ruby once lived, now occupied by his studio director, Tyler Britt. Sterling Ruby Studio, as even the artist himself sometimes calls it, is a formidable operation employing an office team of seven and a core studio crew of four, with additional freelancers who work as needed.

Schiff says, “We think of it as a family business.” It is located in Vernon, an industrial city south of Downtown, the dysfunctional place on which Vinci is based in the television show True Detective.

Between 2010 and 2015, Ruby commuted to Vernon from Sunland, a semi-rural community where Los Angeles’ northern edge meets the San Gabriel Mountains. The black-painted, cedar-clad home Ruby and Schiff built there is idyllic, with magnificent mountain views from the top of its unkempt garden and peacocks screeching in the trees, but the hour-and-a-half rush hour drive to Vernon became more than the artists could bear. So while they wait for their new home to be completed, they are renting in Pasadena.

“It’s pretty suburban. I don’t necessarily mind that,” says Ruby, “but the other day I counted three Trump signs in front yards. I thought that even the people who supported him didn’t put those out!”

The journey south from Pasadena to Vernon takes us through the kind of environments that have most significantly influenced Ruby’s work: low-income neighbourhoods where light industry abuts residential streets, and where squat, dusty hills rise either side of the road, empty of development except for the odd, lonely house. Always in the distance, the high-rise, mirror-glass office buildings of Downtown glint through the haze.

“There’s something about these regions that are neither this nor that, that have a very heavy psychological impact on the people who exist within them,” he says. He sees it as a distinctly Los Angeles phenomenon.

Ruby took a lease on a warehouse on Fishburn Avenue, in an industrial pocket east of Downtown, around 2005. He partitioned the building and subleased studios to friends. “It was wild,” he says. The road was unpaved, and there were few businesses in the area except for the stinking recycling plant opposite the studio that still makes your eyes sting. “There was this homeless guy who had all these dogs. Because of all the scrap lots there was trash everywhere. When I say it was the wild west, it really was. Anything could happen.”

When Larry Gagosian first visited Ruby’s studio, in 2008, a stray dog charged through the door as he arrived. Outside, it was raining, and the wet dog, covered in mud and tar, jumped up on to Gagosian’s cashmere coat. The visit from the prospective dealer was a disaster. “I didn’t talk to anybody from the gallery for years after that!” says Ruby. After working with a string of other galleries, Ruby finally joined Gagosian in 2014.

In 2009, Ruby moved to a much bigger studio complex in Vernon, further south, across the concreted LA River. Last year, Ruby expanded into even bigger premises in the area — 110,000 sq feet of studio space on a four-acre plot.

One day recently, Ruby passed a gang of men dismembering what turned out to be a military submarine, salvaging the lead ballast with the intention of selling off the steel hull for scrap. He persuaded them to sell it to him instead, and made sculptures out of it. He did some research, and eventually discovered the submarine’s name: the USS Los Angeles.