Tinseltown in the Rain 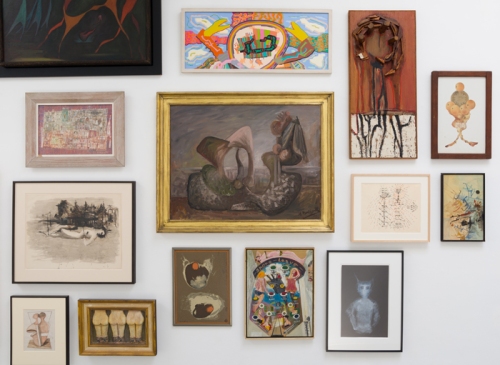 Man Ray once commented that ‘there was more surrealism rampant in Hollywood than all the surrealists could invent in a lifetime’. The line comes to us via William Copley, who, in 1949, exhibited canonical works by Max Ernst, René Magritte, Man Ray and others in a short-lived gallery in Beverly Hills, to almost universal indifference. There were, however, a handful of Los Angeles artists who took notice, including Lorser Feitelson, Helen Lundeberg, Peter Krasnow and Knud Merrild. These artists and many more are brought together by curator Max Maslansky in ‘Tinseltown in the Rain: The Surrealist Diaspora in Los Angeles 1935–69’.

Maslansky – himself an artist as well as being director at Richard Telles – makes an appealing, if somewhat unfocused, argument in this exhibition of paintings, sculpture, photography, animation and film: that European surrealism was the central influence on the modern art history of Los Angeles. I might propose an even more unfocused argument: that since Los Angeles had become the image capital of the world by the latter half of the 20th century, it follows that surrealism was the most influential artistic movement of the century.

The nuts and bolts of Maslansky’s thesis are assembled in the back room of the gallery, where some of the exhibition’s outliers find themselves in unlikely company. As Maslansky notes in a well-researched essay, it was André Breton who initially advocated for cinema’s capacity to meld dreams and reality, to compress time and overlay images. Maya Deren and Alexander Hammid’s Meshes of the Afternoon (1943) and Kenneth Anger’s Inauguration of the Pleasure Dome (1954) both espouse trippy Bretonian techniques of estrangement and doubling. The abstract filmmaker Oskar Fischinger – employed, like many mid-century European émigrés, by Walt Disney – contributed to Fantasia (1940) before walking off set, frustrated by Disney’s interference. His glorious, animated An Optical Poem (1937) also plays here.

The problem is that none of these artists considered themselves surrealists. Neither did such diverse figures as photographer Edward Weston, Beat collagist Wallace Berman, conceptualist William Leavitt or wilfully lowbrow painter (and founder of Juxtapoz magazine) Robert Williams, all of whom have work included in the show. Indeed, the abstract films of Fischinger were scorned by Salvador Dalí. The diaspora identified by Maslansky may have been an inadvertent one, absorbing the already-disseminated influence of surrealism by osmosis.

A salon-style wall hang of more obviously surrealist paintings occupies the main gallery. Married couple Feitelson and Lundeberg even forged their own movement, a rational critique of surrealism (rejecting irrationality and unsolvability, disregarding Sigmund Freud) that they called postsurrealism or subjective classicism. Lundeberg is represented here by Untitled Composition (Landscape) (1948), a hazy desert scene in which a rock and a sapling contemplate each other, evocative of a more conservative work by Dalí or Giorgio de Chirico. The flag-like shapes in Feitelson’s Dancers – Magical Forms (1945) recall Mickey Mouse’s dancing broom in Fantasia – a circuitous (but not implausible) route for surrealism to infiltrate his work.

The paradox of surrealism’s supreme importance for contemporary culture is that much of the original art has not aged well. The best paintings here were often those that bore least immediate relation to the movement, such as Lee Mullican’s vibrant Untitled (1958), fizzing with intimations of eyes and teeth, or Merrild’s poured Sidereal Parturition (1947). Beatrice Wood’s relief ceramic Three Buttocks (undated) depicts three ladies’ plump buttocks squeezed into a tight frame while, nearby, Charles Garabedian’s equally lusty painting, Shore Leave (1965), which portrays a pinball machine play field riddled with scantily clad women, stands in earthy distinction to Feitelson and Lundeberg’s otherworldly visions. What Maslansky’s exhibition demonstrates is that, while artistic legacies are not always neat or consistent, their messiness and inconsistency can be testament to their breadth and importance.