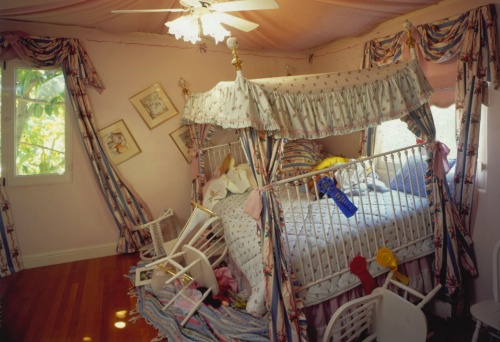 “A crock of shit” is how Mike Kelley once described what he called the “modernist cult of the child.”[1] He was talking about the idealization of children – of childhood, rather – over the past two centuries, since Romanticism exalted it as a pure state, uncorrupted by the mores and hang-ups of culture and society. In visual art, this was manifested in the self-consciously childlike styles of Picasso, Miró and Klee, and the later affectation of children’s art by Dubuffet, Jorn, and countless others who, for associated reasons, also fetishized the ‘primitive’ and the ‘insane’. “Where do the children play?” asked Cat Stevens in 1970, testifying to the persistence of that myth of purity even through late ‘60s counterculture, the era of the Flower Children.[2]

By the end of the 1970s, the youth had turned nasty. In Los Angeles, there emerged a now-canonized cadre of artists that centers (in the myth, at least) around Kelley and Paul McCarthy, but which also includes Richard Jackson, The Kipper Kids, Raymond Pettibon, Tony Oursler and Michael Smith, aka Baby Ikki. An overwhelmingly male, straight, white group, wrestling with (amongst other things) the anxieties of modern American manhood, often through the figures and spaces of adolescents, children or babies, particularly young girls.

These artists roundly rejected the two most pervasive clichés about childhood – the idealized view that childhood is a prelapsarian time of piety and purity, and its antithesis, the view that childhood is a time of savagery and violence, of unsocialized ignorance that can (and must) be remedied by acculturation. Instead, Kelley and his peers adopted a third line, strongly informed by psychoanalysis, in which childhood is by no means innocent, but is the wellspring of adult fears, desires and aggressions.

In 1980, for a show at LACE alongside Oursler and Syrop, Kelley made his first installation, titled The Little Girl’s Room. The installation, Kelley later claimed, was prompted by a “dream within a dream.”[3] A little girl has a vision of “a pimp-like man whose smile revealed an infinity of sharp teeth.”[4] She is immediately motivated to redecorate her room, switching from girly pinks to austere modernist black and white, from pictures of horses and heartthrobs to Malevich and Bridget Riley. Kelley’s installation was not even, really, a fabrication of a bedroom interior. An enclosed space was lit with black-light, empty except for one leaning sculpture and a picture of the lasciviously grinning pimp over the door. In his narrative, the prospect of adult sexuality impelled the girl to put away childish things, to embrace masculine ‘advanced culture’. She is left with little more than a schematic shelter, virtually all her furniture and possessions displaced from the room itself and turned into minimalist ciphers: cold comfort indeed. In this equation, abstraction equals desolation.

In 2011, Richard Jackson created an installation for an exhibition at David Kordansky also called (with an unacknowledged nod) The Little Girl’s Room. As in Kelley’s piece, innocence, puberty and sexual initiation are allegories for cultural indoctrination. The girl, here, is a fiberglass cartoon with a smiley yellow face who grasps an upside-down pink unicorn. Her bedroom walls (actually stretched canvases) bear a conflation of clouds and stars overlaid with copies of Frank Stella Protractor paintings. Before the exhibition opened, Jackson activated the installation, pumping buckets of paint out of the pink unicorn’s ass, in a rather distasteful demonstration of defilement as imagined by a naughty little boy – defilement of Stella, of Modernism, of tacky consumer culture, of the little girl herself. The creepiness that lurks within Kelley’s work is fully unleashed by Jackson’s fantasy – a fantasy that is both knowing and ironic in its use of symbols, but also more than a little bit gleeful about the violence that it enacts. The abstraction of symbols such as the cartoon girl and unicorn, and the ostensibly innocuous substance that Jackson splashes over them (it’s only paint, people![5]) give him license to transgress in a way that reveals more about latent masculine desires, perhaps, than he ever intended.

Of course, both Kelley and Jackson’s Little Girl’s Rooms have nothing, in fact, to do with little girls. “All this stuff is produced by adults for children, expressing adult ideas about the reality of children,” Kelley later commented on the stuffed toys that he often used in sculptures and installations.[6] Perhaps Kelley and Jackson reveal a deeply sublimated adult fantasy: our culture invents girls in order to defile them.

In his installation Tumbleroom, first created for an exhibition at Deitch Projects in 2001, Martin Kersels takes a girl’s bedroom and smashes it to smithereens. The work was inspired, in part, by the scene in the 1951 movie Royal Wedding in which Fred Astaire – newly in love and feeling lighter than air – dances on the ceiling of his apartment, but it also pays homage to McCarthy’s nightmarish Bang Bang Room (1992), a kinetic sculpture in which walls of a living-like room move in and out, while their doors slam open and closed.

Kersels replicated the steel gimbal set that enabled Astaire’s apparent defiance of gravity, and decorated the room as if the pink-walled bedroom of a teenage girl. When the room was rotated by a motor, at about four revolutions per minute, its loose contents crashed from corner to corner, gradually disintegrating. The sculpture, Kersels has said, is “an entropy machine,” a grim visualization of adolescent aging, the loss of childhood innocence, the upheaval of time.[7] He also saw it as a stomach, digesting its contents and occasionally spewing out small flecks of debris.

Paired with Tumbleroom was a video titled Pink Constellation (2001). In it, a fixed camera recorded a young woman dancing nimbly from floor to wall to ceiling as the room turned, and then Kersels himself, careening and crashing into the fragile furniture. As with Kelley’s Little Girl’s Room, Kersel’s teenage girl’s room ingests, then spits out, the adult male culture that would normalize or transform it.

By putting himself in the work, Kersels told me he wanted the work to convey the idea of himself being shaken loose from the center of his own universe. About four years before he conceived of Tumbleroom, Kersels became a father. That experience of being displaced from the center of one’s own orbit is a feeling familiar to any parent. (The day I spoke to Kersels on the phone, I had just let my baby son slip from my grip and fall face-first onto the floor. He was sporting a split lip and a bruise.) The sense of giant clumsiness, of parental inadequacy and potential harm is allegorized by Kersels’ large frame as it collides with – and is potentially harmed by — the child’s environment. Pink Constellation takes a less depressing position than Kelley’s and Jackson’s works: a demonstration of the devastating power that childhood – especially female childhood – holds over grown men.

It is too little noted that around the time that McCarthy made his first mature work, videotaped performances from the mid-1970s in which infantilized characters (mis)used commercial foodstuffs, he too became a father. Aside from the abject messiness of childcare (a messiness which children are blissfully oblivious to), one theme through McCarthy’s early work is the fragility of domestic space, which in his performances is constituted by flimsy, temporary sets.

There is a photograph by Charlie White, the final part of a trilogy from his series ‘Everything is America’, that echoes the monstrosity of fatherhood, even to fathers themselves. Titled Patrimony (2006), the image shows a huge, hirsute man with baked red skin, more satyr than human, standing naked in the living room of a modernist wood-paneled home. Behind him, white leather Mies van der Rohe and Eames furniture is tipped over on the rug, and a vase is smashed. In his thick-clawed fingers, the creature holds a tiny white baby girl. The baby may be at the center of the scene, but her monstrous father is the subject with whom the viewer is invited to ambivalently empathize.

White has said that he cannot conceive of his subjects without their settings; the defiled modernist interior (the grown man’s room) is as integral a symbol in this narrative of patrimony as is the helplessly grotesque father.[8] The work is not so much about the raw, messy and confusing experience of fatherhood as it is the raw, messy and confusing experience of historical cultural dominance by white, Western, male figures, as perceived by white, Western men in the present day. All these artists have chosen to reckon with their own implication in the ignoble histories they have inherited. In doing so, they cast themselves both as victims and aggressors. There are generational differences in their approaches, however; whereas Kelley, McCarthy and Jackson hurl themselves, abjectly, into the depths of their own Ids, Kersels and White remain more circumspect, analyzing their anxieties about adulthood rather than wallowing in them.

A precursor to these works is Aktion mit Diana (Action with Diana), a 1967 performance by the Viennese Actionist Günter Brus who was influential on artists such as McCarthy. While his four-month-old daughter lay naked for an hour on a white cushion, Brus, painted from head to toe in white body-paint, manipulated objects including a rattle, a breast-pump, nails, a corkscrew, and Diana herself. Given the extreme nature of Brus’ performances, which often included real or simulated acts of violence, Diana’s presence must have lent the scenario an ominous atmosphere. By the end of the performance, however, the baby gurgled contentedly while Brus cowered in a corner of the white space. Brus’ performance shares with all these works a fundamental narrative arc. The little girl leaves the male artist at a loss, as clumsy and helpless as White’s satyr, reduced to an angry, scatological manchild, impotently savage and transgressive in only the most pathetic of ways.

[7]  Video documentary, shot and directed by Peter West on the occasion of Disorderly Conduct: Art in Tumultuous Times, 2008, curated by Karen Moss at the Orange County Museum of Art, Newport Beach, CA, accessed at https://vimeo.com/52303750