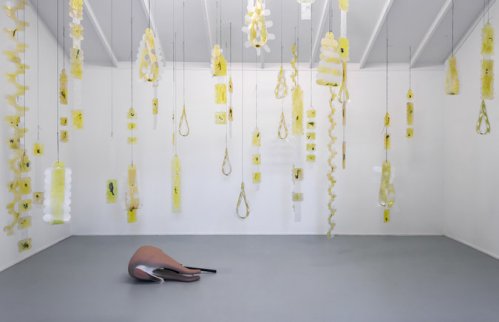 The pall of death hangs over Chadwick Rantanen’s exhibition ‘Alarmer’. This is ironic because many of the constituent objects in his assemblage sculptures are expressly designed to simulate life. Battery-operated hunting decoys flap their wings and wag their tails in order to attract animals that are living (though soon to be dead).

Rantanen’s Deer Rear (all works 2017) is a pitiful construction. The stylized hindquarters of a deer are laid on the floor, black electrical guts spilling out of the creature’s belly. With an irregular force and tempo, its tail twitches as if it were in the final stages of expiration. In a sense, this is indeed the case: the tail is powered by a dying power pack, which the artist has fitted with batteries smaller than those intended by the manufacturer. As a paradoxical consequence, the decoy is animated with an uncannily realistic weariness.

Rantanen often works with brand-new objects that are already tired in all sorts of ways. Consumer products, probably made in Chinabut associated with red-state Americana, speak of a broader national malaise. Between the petrochemical origin of these plastics and the decoys’ intended violence, there liesan implicit position of antagonismtowards the natural environment, even as its resources are depleted.

The batteries that power the kinetic sculptures in ‘Alarmer’ are cased in plastic sleeves, designed by Rantanen, which resemble cartoon bees. These yellow and black striped covers enable them to fit into slots for the fatter (and higher capacity) batteries, while their plastic wings serve no function except to prevent the cover from closing. Bees, today, are contradictory symbols: of Utopian collectivism and – as Colony Collapse Disorder takes hold across North America and parts of Europe – of environmental catastrophe.

All around Deer Rear, in the shed-like back gallery of Team Bungalow, sculptures that look like ornate, Jorge Pardo-designed flypapers hang from the ceiling. The templates for the scalloped forms come from a pattern designed for products meant for use in hospitals – gowns, wallpaper, curtains, carpets – which is intended to be aesthetically inert. The installation is titled Hanging Strips (Yellow) – yellow because parts of the translucent plastic are smeared, repellently, with silicone glue. Stuck to this mucous substance are wrinkled flakes ofa darker material, identified by the checklist as antimicrobial film – which Rantanen reportedly painstakingly scrapes off hospital fabrics. The result is an artwork for the post-nature era.

The icky smeared silicone and antimicrobial film reappears in another, medically inflected sculpture, Admitting (Green): a folded rectangle of corrugated plastic on the floor, the interior gunk only visible through circular apertures and its two open ends. Far more compelling is the large, hanging sculpture Crow Spread, with which it shares Team Bungalow’s front space. This show-stopping work resembles the horrific spectacle of six crows strung up by their feet and flapping in panic. As with Deer Rear, the birds are decoys hacked by Rantanen’s battery adapters, busy bees that seem like parasites, cheerfully speeding the death throes of the trapped birds. The piece is a chandelier for a psychopath’s dining room.

The final irony, of course, is that any owner of these kinetic sculptures will be obliged to care for them by endlessly replacing the batteries, which the motors drain all too quickly. The bees may be powering these end-of-life simulations, but they are themselves designed to die fast. Deception is built upon cruel deception: the illusion of life in these works leads to death, if you’re a crow, or to a repeating simulation of death, if you’re lucky enough to be a human.