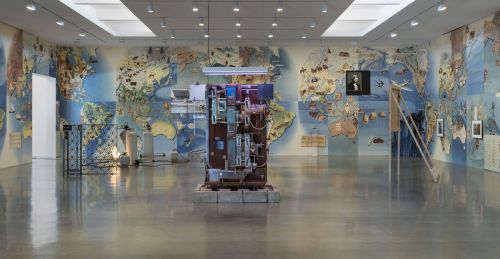 In the large main gallery at Regen Projects, jam-packed with artworks large and small by 21 artists and pasted from floor to ceiling with colourful reproductions from an illustrated world map, the first thing likely to catch your eye on entering is a belch of orange flame at the back of the room. Indoors, especially, fire is hard to ignore.

The flame is produced, intermittently, by one of two virtually identical sculptures by Ariel Schlesinger, benignly titled Untitled (Bubble machine) #1 and #2 (2017). Tanks of hydrogen blow soap bubbles, which – if they don’t pop first – float down onto a grid of live wires, igniting the gas in spectacular fashion. The installation is mesmerizing and beautiful, but also grim: it recalls the gas flares that burn above petroleum refineries and chemical plants, and the alarming, jury-rigged infrastructure one sometimes encounters in developing countries where concern for the environment or personal safety is considered a luxury.

Schlesinger, born in Israel but now living in Mexico City, is emblematic of the agnostic approach of the show’s artist-curators – Mexicans Gabriel Kuri and Abraham Cruzvillegas – to the geographical parameters of their exhibition, part of the Getty’s Pacific Standard Time: LA/LA initiative. The impractically long title – ‘Primordial Saber Tararear Proverbiales Sílabas Tonificantes Para Sublevar Tecnocracias Pero Seguir Tenazmente Produciendo Sociedades Tántricas – Pedro Salazar Torres (Partido Socialista Trabajador)’, officially and near-nonsensically translated as Primordial To Know How To Humble Tonificant Syllables To Suggest Technocracies And Keep Tenaciously Producing Tantric Societies – Pedro Salazar Torres (Socialist Worker Party) – is acronymic for PST repeated over and over, poking fun both at the arbitrariness and the boosterism of the project. No single work bears on its shoulders the representation of the entire Latin American region, but en masse they contribute to a picture that feels both coherent and ready to overrun its borders.

The awkwardness of the anachronistically flattening term ‘Latin America’ is flagged immediately by the exhibition’s wallpaper, which consists of collaged reproductions of six murals commissioned from the Mexican illustrator Miguel Covarrubias for the 1939 Golden Gate International Exposition in San Francisco. The murals show a map of the entire Pacific region – appropriated, dissected and reordered by the curators – annotated with quaint, borderline offensive images of purportedly typical regional dress, modes of transport, agricultural products and so on. (Is the Getty to Kuri and Cruzvillegas what the organizers of the International Exposition were to Covarrubias?)

Radically, nearly half of the artists in the exhibition are not Latinx at all. New Zealand-born Michael Stevenson’s rusting model of a national economy, The Fountain of Prosperity (2006), takes pride of place in the middle of the gallery, in dialogue with Schlesinger’s bubble machines. Another New Zealander, Louise Menzies, contributes an orange banner proclaiming LABOUR & FREE WILL, LOVE & REVOLUTION (2007). Sometimes it seems as if artists are being typecast for their nationality: Mr. President (2006) by Llyn Foulkes – a portrait of George Washington obscured by the face of Mickey Mouse – is hung high on the wall, lording stupidly over the room.

In other instances, one witnesses the translation of Anglo-American forms into a Latin American vernacular. Ben Rivera, born in Honduras but now working in Los Angeles, pays homage to Charles Ray’s Untitled (glass-chair) (1976) with his own Chair with glass (2017), employing a chair that Rivera’s aunt in Honduras took from one of her tenants in lieu of rent. While art forms, like people, migrate unstoppably across borders, it is problematic, to say the least, to situate art by non-Western artists primarily within Western artistic coordinates. In this regard, an artist such as Germán Venegas – a leading figure in the 1980s’ Neomexicanismo movement – seems refreshing. His carved wooden sculptures at first appear to spring from an indigenous mythical tradition. Then, reluctantly, I consider the sculpture of Thomas Houseago; in an accompanying text, Cruzvillegas cites CoBrA, Titian and Picabia among Venegas’ influences. The tough lesson hidden in this enjoyable exhibition is that it is impossible to consider the colonized (and once colonizing) territories of Latin America as separate from Europe or North America. Even if life there is subject to certain unique realities found nowhere else.