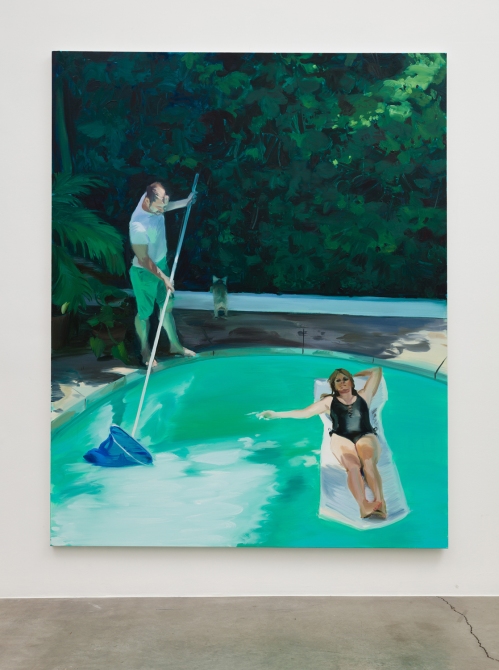 How much can we find it within ourselves to feel sorry for a beautiful middle-aged white woman who lives in a stylish modernist house surrounded by high walls of tropical foliage with heart-stopping views over the endless gridded expanse of Los Angeles? How about when she floats in her aquamarine pool, one outstretched hand trailing in the water, while her hunky pool boy skims leaves and bugs from the surface nearby?

Caroline Walker never directly solicits our pity for the protagonist who recurs throughout the six large oil paintings and several smaller works exhibited in Sunset, but the dominant tone is unmistakably one of loneliness. To make this suite of paintings, Walker, who is British, rented a fabulous house in the Hollywood Hills and a model to go with it – actually a former Miss Colorado – and shot hundreds of photographs. The paintings are far from photorealistic, but the gaze of the lens persists, making them feel both cinematic and voyeuristic. The narrative that emerges, however, is of nothing much happening: the woman works out, eats in a restaurant, talks on the phone, gets dressed in a mirror. She seems to live a life of ease and elegance, untroubled by the grime and grind of the city beneath her.

Why, then, is the mood so bleak? Perhaps because Walker gives us no hint of anything going on behind those heavily made-up eyes. The woman appears as an expressionless cipher, a soul trapped by the rigid verticals and horizontals of her home just as she is by the contours of her toned body. In Desayuno (all works 2017) she examines her breakfast like it’s a problem to be solved. In Thanks for Noticing she fastens a necklace as if donning armour for a battle.

In reading these paintings, I am acutely conscious of leaning into archetypes and clichés. What, after all, do I know about the inner lives of faded beauty queens, beyond how they are usually depicted in film and on TV? Perhaps the presumed pathos of the narrative contradicts the actual evidence of the paintings. In the most striking painting in the show, the title work Sunset, we look down from a balcony to where the woman is drinking and speaking on the phone. Beside her is another glass. Is it ours? And whose is the recently vacated table setting in Desayuno?

Walker must know full well that she is trafficking in clichés, although her intellectual position towards them is never fully revealed. As an overactive generator of images, Los Angeles (and Hollywood in particular) continues to promulgate clichés about itself as if its very existence depended on it. Those clichés are often exclusionary and regressive. But what do Europeans such as Walker (or, full disclosure, myself) care about that? The pattern for decades has been for visitors to arrive in the city and plunder it like colonial marauders for the imagistic treasures it offers. Anyone can go home with a photo of the sun sinking into the Pacific, or a selfie with a palm tree and a rented Mustang. What about the people who live here, though, who find themselves – like Walker’s protagonist – trapped half in and half outside of a dream that was never truly their own?