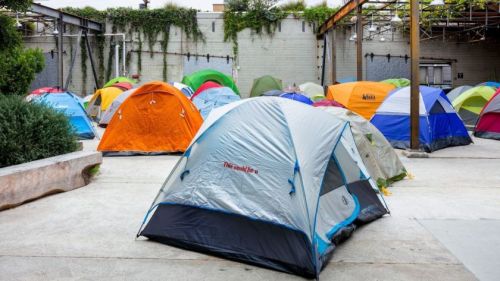 Just inside one suite of galleries at Hauser & Wirth is a small display of material related to Ornette Coleman, the late saxophonist and free jazz innovator to whom David Hammons has dedicated the largest survey of his work to date and the first in Los Angeles for 45 years. ‘It was when I found out I could make mistakes that I knew I was on to something,’ said Coleman, who died in 2015.

There are plenty of fluffed lines and bum notes in Hammons’s exhibition – including the centrepiece of the show – although I don’t believe any are mistakes. Hammons’s art is rarely as impulsive or careless as it often looks. When he transgresses the conventions of museological display (the standard against which a mega-gallery like Hauser & Wirth measures itself) he does so deliberately, with precise and disruptive intention. Not only is there no checklist for the exhibition; there is no press release, except for an abstract drawing resembling graphic musical notation, and no labels, except for the occasional title pencilled onto the wall, sometimes with a date. Mixed in are other inscriptions sounding like banal inquiries from collectors or gallerists: ‘Has anyone seen these?’ and ‘How many of these did you make?’

Alongside finished artworks, including framed examples of Hammons’s sublime drawings made with bounced basketballs and powdered Kool-Aid, there are plenty of apparently ad hoc, readymade interventions, installations in which it is unclear where one ends and the next begins, and cheaply framed, creased inkjet printouts of canonical past works such as Hair and Wire, Venice Beach (1977) and other snapshot photographs. Since so little is titled, let alone dated, it is difficult to determine what is old, what is new, and what is a remix of existing odds and ends from the artist’s archive. Nothing is treated with much reverence – an attitude exemplified by Hammons’s abstract paintings, which have been all but obscured by grimy tarps. (Some tarps, amusingly, have nothing behind them.) A snazzy suit on a mannequin resembles one Ornette Coleman wore on stage; I assume another is also Coleman’s. I have no idea whether these are borrowed artefacts, Hammons’s art works, or fabrications. Hammons, it seems, wants his viewers to relax, historiography be damned.

It is more than just a resentment of institutional standardization that fires what Fred Moten called Hammons’s ‘practice of silent destruction and itinerant grift.’ Perhaps more than any other artist (though Tino Sehgal also springs to mind), Hammons uses the blunt force of his artistic vision – and his consequential market clout – to bend the structures of the commercial art world almost to breaking point. In doing so, he clears a space for a kind of expansive free association between objects, images and context that is akin to Coleman’s democratizing approach to music. In one near-perfect gallery, our attention bounces from a small grey Agnes Martin painting to a melancholic photograph of stained wallpaper to a sculpture featuring a floor lamp illuminating a Sotheby’s shopping bag printed with a Dan Flavin fluorescent light grid. A gold suit (Coleman’s?) converses with the gold wallpaper and an ephemeral blue-stained gauze slung over another abstract painting by Hammons, while a 1974 body print – in which Hammons pressed his lips, hands, and chest onto paper to make a totemic face – watches the watchers.

The loudest and most clashingly discordant notes of the exhibition emanate from the gallery’s central courtyard, where beside the patio tables of Hauser & Wirth’s in-house restaurant, a colourful sea of tents spills down a breezeway, almost into the street. On some, Hammons has stencilled, ‘this could be u’. Massed tents, in parts of downtown Los Angeles, are an unremarkable sight, as the city’s longstanding homelessness problem swells to unprecedented seriousness while areas adjacent to Skid Row – such as the Arts District, where Hauser & Wirth is located – are redeveloped in a parallel and seemingly oblivious wave of gentrification.

I believe this installation is a trap: a parody of pious, politically activist art. Save your indignation at its apparent hypocrisies and recall Hammons’s contention that, ‘I can’t stand art actually. I’ve never ever liked art, ever.’ What would art by someone who hated art look like? To me, this overblown and too-easy gesture is laced with self-disgust (those modern tents pop up so effortlessly, especially with a capable crew of assistants) – an impression that crescendoes in one small photograph, crudely taped near posters for Hammons’s past exhibitions. On an LA sidewalk, a homeless person’s tent has a poster for this exhibition taped just as crudely across it. The pathos and moral crisis of that image haunts me, and seems like an analogue for the cognitive dissonance in viewing (and presumably making) art about systemic social violence and economic inequality a few feet away from a restaurant serving $27 steak and eggs.