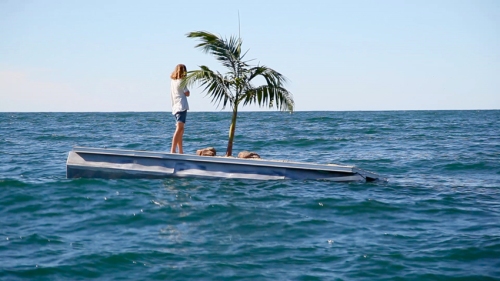 Joel Kyack is an artist not naturally given to subtlety. His last, maniacally overhung exhibition at François Ghebaly Gallery, in 2011, was titled Escape to Shit Mountain, and it included a large banner painted with the words ‘Kill all endings’. Old Sailors Never Die, his latest outing and only the second exhibition to take on Ghebaly’s new and enormous gallery space, reveals some remarkable and uncharacteristic moments of restraint.

For those partial to Kyack’s trademark blend of brash, cartoon aesthetics and salt-of-the-earth allegory, however, there is still plenty to behold. Megalodon (all works 2014) is a ten-foot-high set of shark jaws, cut from wooden planks and bristling with teeth fashioned from kitchen knife blades. Kyack might not welcome a comparison with Damien Hirst (who would?), but with Megalodon he seems, like Hirst, to prioritise impact over complexity.

A shark represents, for most of us, a rather hyperbolic signifier of death; more than being eaten, what keeps me awake in the small hours is a dread of floating into oblivion, helpless and alone. Which, as it happens, is the allegorical fate that Kyack describes in the exhibition’s central and eponymous work. In the installation Old Sailors Never Die, a video plays inside a rudimentary shack. A man is seemingly adrift on a flat-topped boat with no evident means of propulsion. Planted in the deck beside him is a small palm tree, under which he shades himself from the sun. Then, without explanation, he lashes the tree to a rock and pushes it off the side of the boat into the green abyss.

Alright, so the tree is not very big, and there is little sense in the short video of any real peril, or even that the man is alone (the camera crew were surely following his every movement). However, with this simple surrealist gesture, Kyack structures the show around a mystery, a failure of sense, rather than cheap sideshow wisdom.

A highpoint of the exhibition is the press release, which consists of ten multiple-choice questions. Number five, ‘What do you feel in destroying something that provides you comfort and companionship? (a) freedom (b) remorse (c) indifference’, gets close to the heart of the conundrum that is Old Sailors Never Die. Stepping out of the shack, you see that the roof is formed from the boat in the video, and a giant pair of cutoff denim shorts turns its twin prows into legs. The prone sailor and the grounded ship are one and the same.

Kyack is at his most restrained with Water Level, a clear hose containing dyed blue water and pinned to the wall at each end. The device is a makeshift spirit level, and a demonstration of empirical fact. It contrasts with a nearby tableau contriving a ship’s table with a seesawing horizon out the window and a motorised swinging lamp. NIGHT – INT. SHIP – DINING TABLE, though an elaborate construction, is a simple fiction. It offers, like the best parts of this show, a space for viewers to fill with their own answers.