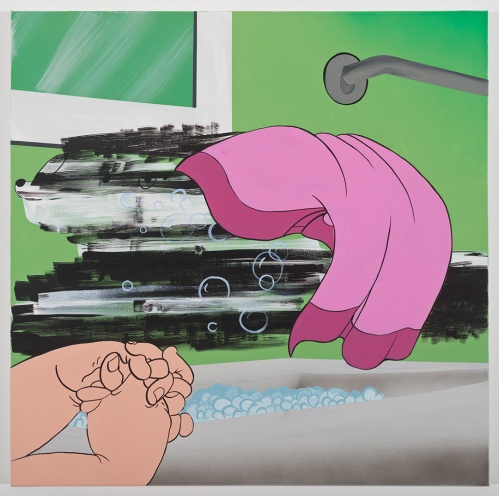 The riotous, lurid paintings of Jamian Juliano-Villani speak in a language familiar from popular culture, but they articulate things never dreamt even by the most twisted imagination. Aliens having sex, suicidal trousers, and deviant Japanese river imps are just a few of the images that populate her paintings. Despite her work’s irreverent tone, Juliano-Villani is involved in a serious, introspective exploration of her own psyche, of the ethics of appropriation, and of the possibilities for contemporary painting.

We spoke in her Brooklyn studio in May 2014.

JG: At the risk of sounding facetious, where do your paintings come from?

JJV: Well, first of all, I just want to paint shit that I like. So I make lists. Words like “scarecrow in an empty cornfield” or “paper cuts” or “martial arts”. I’ll try to think about them from a psychological angle. Each painting requires about twenty hours of research, looking for the ideal references on how to represent these hyper-specific things. I don’t do any sketches, at all. It makes it stale. I try not to edit – the paintings are purely additive – and I don’t use Photoshop. I don’t know how! The whole point is that I want to marry these things together that aren’t really supposed to be there, so they all have to be from the same hand.

JG: But you’re also copying other people’s hands too.

JJV: Sure. I might use a Chuck Jones animation background that he did for Warner Bros. I love obscure animation too. Each country has its own cartoon aesthetics. Hungary has a rich history of really progressive, fucked up animation from the 60s and 70s – Marcell Jankovics did some amazing stuff… especially Sisyphus (1974). Ralph Bakshi, too, in the U.S. – he’s the fucking man. I’d never use Disney though. The references I use are usually from people I admire who I feel need to be re-evaluated or recontextualized. It’s this simultaneous exploitation and homage. I’m trying to make the most emotive paintings that I can, and the most personal, but through other people’s voices. Because I’m trying to make really populist images. If it’s just coming from me, it doesn’t count.

JG: So are your references intended to be recognised by the viewer?

JJV: Well they’re iconic. But they’re removed just a little bit. They’re like something that you knew from childhood but you can’t quite place. Sometimes you just recognise the time period. My parents were commercial printers, so I grew up looking at all this weird graphic design from the 70s and 80s. Advertisements from that time were so much more effective because there was less fluff. They communicated more directly. But it’s not some sepia vision of kitsch that I’m after. I’m drawn to references that are self-aware, follow a specific agenda, and are transparent. I feel most art runs away from its references. I’d like to be hyper-specific about what I’m taking in. 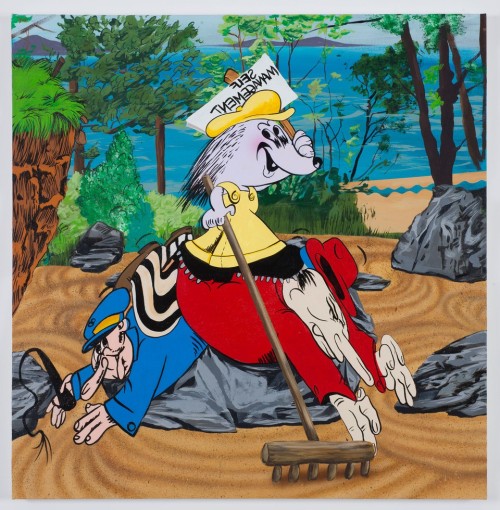 JG: There’s an interesting paradox in your work in that, on the one hand, it is really graphic and quickly legible, and on the other, it can be extremely obscure in its references and confusing in its narrative.

JJV: The thing that prevents the work becoming an emptier version of a James Rosenquist collage is the narrative. That’s where I come in. Something needs to filter out what gets used and what doesn’t, so my personal taste and interests are always first, references second.

JG: Do you ever feel like you’re making things that you don’t completely understand yourself?

JJV: Well for a long time I was working for other artists, 40 hours a week, then I’d come home and do my own paintings, and I figured no one would ever see them. So I painted whatever I wanted. And only later I realised how fucked up they were. And they’re extremely personal. I must seem fucking crazy! I think I’m just really angry.

JJV: I guess I’m angry because I’ve felt alienated by art. I went to school, skipped grad school and never felt a sense of kinship with my peers about what art should be. I’ve always felt pretty alone in that regard. So many things pass the test of what is “good” or “bad”, and I’m frustrated that there doesn’t seem to be anything beyond that polarization. What the fuck even makes something good, or valuable? I don’t know, do you? I just want everyone to admit we’re all full of shit. 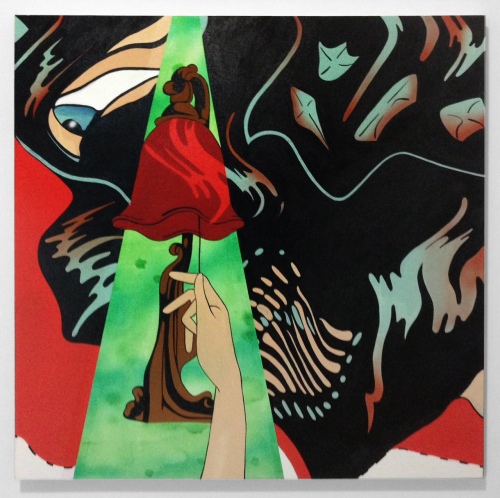 JG: You’ve said in the past that you don’t believe that contemporary painting has any obligation to acknowledge its own history.

JJV: I think making paintings about painting – especially about historical abstraction – is way too self indulgent and masturbatory. I think illustration is much more powerful. Illustration actually gives you something. It’s not lofty, it’s not open-ended, its not bullshit, it’s explicit. Art’s already alienating enough.

JG: But aren’t your paintings also open-ended? No matter how graphic or explicit they are.

JJV: They’re not just meant for the art world though. I hate these high-brow / low-brow distinctions, because they imply taste, and class. I’m just trying to use things that my little brother gets, and the Verizon guy who comes to my studio gets. My paintings are meant to function like TV, in a way. The viewer is supposed to become passive. Instead of alluding or whispering, like a lot of art does, this is art that tells you what’s up. It kind of does the work for you, like TV does.

JG: A number of your paintings, like Midnight Snack (2013), deal with racial stereotypes in ways that could make some people uncomfortable. Can we talk about that?

JJV: Yes please! In that painting, you’ve got these black characters taken from a Ralph Bakshi animation, and hands representing white guilt reaching out of the freezer compartment. The whole thing with Bakshi was that he was attacking these racial stereotypes in his work, but it was so progressive that his intent got confused. He was white and Jewish. But actually he grew up in Brooklyn, had a black girlfriend, went to a predominantly black school. This was his life. It’s really not about race ­– it’s about real world shit. And because I’m white and I’m a girl, people assume it’s a parody or trope of racism. It’s not. This isn’t a bullshit excuse, but a reason. I was raised largely by black women. My parents are from Newark, and I worked and played in their silk-screening factory there. The people who worked there looked after me. But it’s also like, there are black people in the world; why the fuck wouldn’t I paint them? What the fuck is post-race? Everyone’s such a pussy – walking on eggshells. And for the most part, the only time that black artists are recognised is because they’re doing something in a white world. That’s bullshit.

JG: Is that comparable to your problems with Feminism?

JJV: Yes, I feel that being a feminist artist is too singular, and polarizes your audience. You get acknowledgment for doing something in a “man’s world”. When I paint women, I paint them the way they are viewed through the lens of westernized visual culture. Big tits, big ass, lots of hair. Because that’s what we expect women to look like, or our subconscious does: it stereotypes them, much like we do with anything that isn’t male and white. Instead of dodging the subject by painting asexual waifs on a beach, I’d rather confront these things and play them out so they are total non-issues. 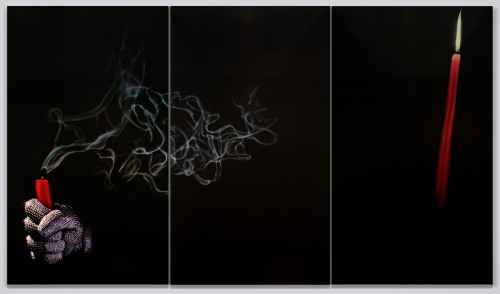 JG: With your new triptych, Some Deaths Take Forever (2014) – your largest work to date, which is done in a more photorealist style than your other paintings – are you thinking about the categories of high versus low, or major versus minor genres?

JJV: Well it’s funny because everyone thinks I make these really fucked up crazy cartoons. The thing is, I don’t really like cartoons. I like what they do. I like that the black line is really legible. It’s about ethics. I’m not doing these paintings because I like painting. I don’t. I’m making them because I want people to look at painting differently. It’s about privilege, what art is, how people understand art. It’s about the Other; it’s about why some things are recognised and other things not.

JG: Can you explain a bit about the painting?

JJV: It’s based on the cover of an album cover from 1980 by Bernard Szajner, who I’ve known since we collaborated on a video when I was an undergrad. He was the inventor of the laser harp, which was used by Jean-Michel Jarre in the first post-Mao concert in China. Bernard gave him his permission to use it, but Jarre never credited him, and so Bernard disowned his invention. These issues around copyright, ownership and authenticity are important to me – all I do is appropriate references – but also just because Bernard and I are friends. The album, Some Deaths Take Forever, was put out by Amnesty International in support of prisoners on death row. Each of the three panels of the painting is the size of a cell at Alcatraz. On the left panel, I’ve repainted the image of a hand holding an extinguished candle from the album. But then I’ve added smoke, and on the right is a new, lit candle.

JG: I’m really interested in the tension in your work between your selflessness – your homages to other artists, your collaborations, and the lack of a single distinctive aesthetic – and then on the other hand how everything gets filtered through your subjectivity. You’re even putting yourself in some of your paintings.

JJV: That’s what our culture is. Taking shit, reclaiming it.

JG: Do you ever feel at all uncomfortable about that?

JJV: No, not at all. I’m really explicit about my references, and I archive them all, for every painting. One day I hope to do a book in which they’re all listed alongside the paintings. Plus each person takes different things. The things that I use are hyper-specific to me and my interests.