Will there come a day when Jason Rhoades’s giant lexicon of euphemisms for female genitalia – typically manifested in coloured neon letters, several inches high, strung throughout his installations – no longer has the power to offend? Will adherents of the Muslim faith one day become so laissez-faire that they no longer mind that, in Rhoades’s installation My Madinah. In pursuit of my ermitage… (2004), these neon words are dangled from the ceiling above a parody of a mosque, with old towels laid out on the floor instead of prayer rugs? Not to mention the sensitivities of Native Americans, who are invited to witness dubiously authentic embroideries and dream-catchers, acquired in bulk as raw material for Rhoades’s The Black Pussy … and the Pagan Idol Workshop (2005) and Tijuanatanjierchandelier (2006), tangled with Moroccan ornaments, Mexican serape blankets and ‘slippery nipple’ mugs, amongst other tourist tat.

Maybe Rhoades imagined that his iconoclastic transgressions against political correctness would come to seem quaint as social mores moved on and multiculturalism churned us all into an indifferent, relativistic sludge. Or maybe he would be pleased to know that, for now at least, the very opposite is the case.

A little over a decade after the artist’s tragic early death, Rhoades’s wilfully obnoxious installations are, if anything, even more problematic than they were when they were made, as the exhibition ‘Jason Rhoades. Installations 1994–2006’ makes plain. The six installations included in the show were created at a time when earnest discussions around identity politics in liberal intellectual circles were causing a backlash from conservatives, straight white men, shock-jocks, gross-out cartoonists and moviemakers, as well as bad-boy contemporary artists such as Rhoades. Those generational tremors, gathering force far out to sea, swelled into the political tsunami of Donald Trump’s election in 2016.

‘Jason Rhoades. Installations 1994–2006’ is, above all, a grandiose study of heterosexual, American white masculinity. As such, it is not above irony or criticality, or even the occasional self-abhorrence and pathos; but it also presumes a level of audience enthusiasm that, these days, is by no means guaranteed. Rhoades grew up on a farm near Sacramento, and his work reminds us, as curator (and former partner at Hauser & Wirth) Paul Schimmel noted at the press view, that if you trimmed off a ten-mile-wide strip of its coastline, California would be a red state.

Rhoades, in my view, is at his most likable in his early work. The exhibition effectively divides into two halves: the first comprises three installations made between 1994 and 1998 and the second, three installations made between 2004 and 2006, the final three years of the artist’s life. The contrast is striking, not only in materials, production values and dazzling visual spectacle (in which the later works revel), but also in Rhoades’s embrace of autobiography in his earlier installations as an organising principle for their overwhelming material excess.

Swedish Erotica and Fiero Parts (1994), for example, consists almost exclusively of objects that are yellow (and if they were not already yellow, Rhoades covered them with yellow notepad paper). The colour is not arbitrary; yellow, here, is also blonde – the hair colour of Rhoades’s mother, Marilyn Monroe (whom his mother once resembled) and Rosamund Felsen, the proprietor of the Los Angeles gallery that hosted the work’s premiere. The exterior of that building was also yellow, as was Rhoades’s Pontiac Fiero, which he parked outside for the duration of the show; yellow is also the signature colour of Ikea, the Swedish big-box furniture store beloved by the artist and evoked in the installation’s labyrinthine pathways. Rhoades’s Oedipal associations between mother figures and erotic desire, and between fantasies of European cultural sophistication and American consumer capitalism, are not only general sociological observations but private confessions: needy, inadequate and not a little sad. 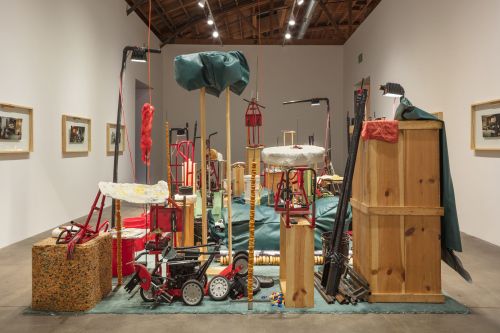 Created a year later, My Brother/Brancusi (1995) is, perhaps, the apex of Rhoades’s self-analysis, before he turned increasingly to pushing others’s buttons. The work departs from a series of photographs of Rhoades’s brother’s wood-panelled bedroom in the garage of his parents’s house, hung side by side with photographs of Constantin Brancusi’s Paris studio. The objects crowded into the centre of the room recall the archetypes of the garage hobbyist and the small-town entrepreneur: a remote control truck, a mini motorbike, and a donut-making machine (apparently relating to a business scheme of his brother’s).

Entrepreneurship, aspiration and consumption are themes that ran through Rhoades’s art and his life. His colossal ambition is palpable even in these early pieces, most of which were made for museums or major commercial galleries such as Hauser & Wirth, and which are exhibited here alongside his detailed instructions for their future conservation. Rhoades succeeded in establishing himself as an important artist, a man for his time. It would be pleasing to be able to credit him, as some have done, with a prescience that foresaw our current moment of national degeneration. My instinct, however, is that Rhoades – who once said ‘I am more interested in creating problems than solving them’ – was part of its cause.