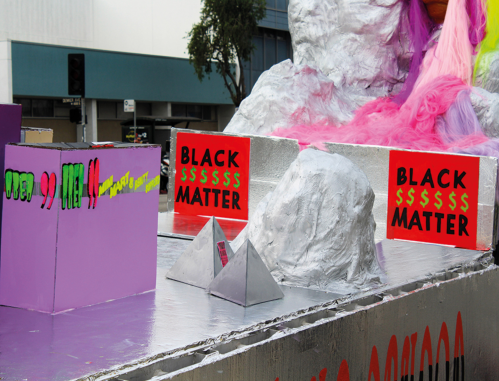 In January 2016, Lauren Halsey made a float for the Martin Luther King Jr. Day parade in the South-Central Los Angeles neighbourhood where she grew up. She rented a 15-metre flatbed truck, which was delivered to her mother’s house. Halsey realized, with some dismay, that she had about 48 hours to decorate it, and only a vague idea of what she planned to do.

Before long, a few of her oldest friends stopped by to ask if she needed help; members of her extended family joined them after her mother made a few calls – or so Halsey guesses, as she told me in a recent conversation. Kids riding by on their bicycles hopped off and lent a hand. They painted cardboard boxes in bright colours, adding signage copied from local businesses: ‘We accept EBT’; ‘Fax Copies’; ‘99¢ Stuff & Thangs’. When the float was finished, her family and friends rode with Halsey in the parade.

Halsey was not really concerned as to whether the float was an artwork. After the parade, the assemblage was dismantled and the truck returned. But that was beside the point: her intended audience had been the people on the street – her community and those who helped make it happen.

‘This collaborative ethos’, she says, ‘has become the soul of my practice.’ In 2018, at the Museum of Contemporary Art, Los Angeles, she created the grotto-like installation we still here, there with the assistance of a cohort aged between six and 76 years old. That same year, for the Made in L.A. biennial at the Hammer Museum, she presented The Crenshaw District Hieroglyph Project (Prototype Architecture) (2018), a full-scale model of a monument she planned for her neighbourhood that would chronicle diverse aspects of local culture, much like hieroglyphs did in Egyptian tombs. Collaboration, for Halsey, is not just about the delegation of labour; aesthetic and thematic decisions are shared in a way that grants a particular group of people, with varied perspectives, equal investment in the finished work. 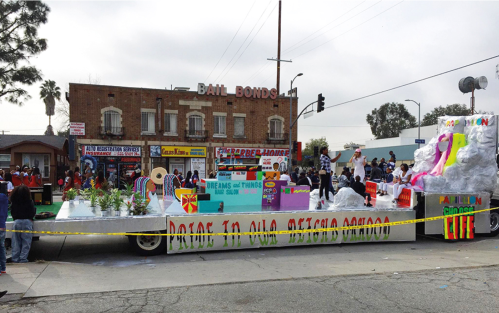 Halsey is rousingly optimistic about what her community is capable of. She also fears for its future, especially when vaunted civic developments – including the new Crenshaw metro line, the Clippers stadium, the Rams stadium and preparations for the 2026 World Cup and 2028 Olympics – push up the cost of living for those who have resided there for generations.

The story of South-Central Los Angeles continues to intertwine tragedy with resilience. In March 2019, the rapper and community activist Nipsey Hussle was slain outside his clothing store on Slauson Avenue. Hussle had become a collaborator and mission partner of Halsey. ‘Nipsey’s values were my values,’ she says.

At Frieze New York, two months after Hussle’s death, Halsey presented two carved white columns, made from what appeared to be plaster but was actually fibre-glass-reinforced gypsum. Prototype Column for Tha Shaw (RIP The Honorable Ermias Nipsey Hussle Asghedom) I & II (2019) is a prototype for a memorial to her late collaborator, although at present she has no plans to build a permanent public iteration. Halsey used her portion of proceeds from the sale of this work to help fund a community centre that she plans to open this year. The centre will be aimed at young people from six to 23 years old (inspired by the age range of her cousins) and will offer activities from karate and CV-writing to coding and exam preparation – ‘sustaining all the types of intelligence that get ignored in the neighbourhood’, Halsey says.

When I ask her if she has leveraged her clout in the contemporary art world on behalf of the struggling local economy of South-Central Los Angeles, she does not hesitate: ‘100 percent.’ In December 2019, Nike released a fashion collection in collaboration with the artist. Her personal successes are successes for the neighbourhood at large.

As of this writing, Halsey is at work on an exhibition for David Kordansky Gallery, which opens in January. The show will feature large-scale models, in painted wood and foam, of South-Central Los Angeles city blocks from various moments during the district’s 100-year history. The facades won’t be precise historical reconstructions; rather, they will be filtered through Halsey’s sensibility, which leans towards Afrofuturism, Egyptology and psychedelia: the funky, the funny and the queer. There is nothing homogenizing about Halsey’s vision of community. Instead, she makes space for individuated positions and aesthetics – her own included – within a scheme that is nevertheless tightly bound by place and history.

Lauren Halsey will have a solo exhibition at David Kordansky Gallery, Los Angeles, USA, from 25 January to 14 March 2020.