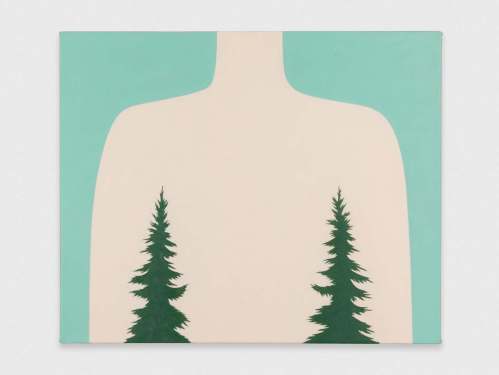 Groins abound in Alice Tippit’s exhibition of paintings and drawings at Grice Bench. They are not always easy to see, however – or rather, they disappear at second glance. What, you might ask yourself, is so crotchlike about that upside-down vase (Peer, all works 2019), that candle (Cinch), or that stick of dynamite (Safe)? Tippit is a master of the now-you-see-it, now-you-don’t school of visual innuendo, of drawing-room indecency, of wordplay that seems outrageously funny even if, on reflection, you can’t exactly say why.

Tippit owes the inspiration for the title of her show to Emily Dickinson, whose poem number 601 begins ‘A still—Volcano—Life— / That flickered in the night— / When it was dark enough to do / Without erasing sight—’. Like Tippit, Dickinson knew how to marshal vastness within the small frames of her poems, and how to open a seemingly interior view to wide horizons. In Tippit’s terse, taut compositions, landscape often exists inside the body: in Dress, two lofty pine trees hairily stand in for the voids between a figure’s arms and torso. Her paintings are indeed still – evoking signs or pictographs, rendered in soft flat grounds with hard edges, rarely more than three colours to a canvas – but they relate to things that are defiantly mobile and mutable: human bodies, words and meanings.

As a female painter representing the female form, Tippit evidently feels the stakes of her project to be vexingly high. How to show without exposing? Her solution is to rely on her ample wit and visual poise. Oscar Wilde springs to mind (although femininity, in the 2010s, is scarcely akin to homosexuality in the 1890s – is it?). Safe, one of the most extraordinary paintings in the exhibition, depicts a lit stick of dynamite boxed in by a tomato-orange ground; I cannot convincingly explain how it looks like a vagina, but it does. What wins out, in the duck-rabbit contest unfolding in the viewer’s visual cortex, is not the vagina but the dynamite, fizzing fast, about to blow this tight semiotic package to smithereens.